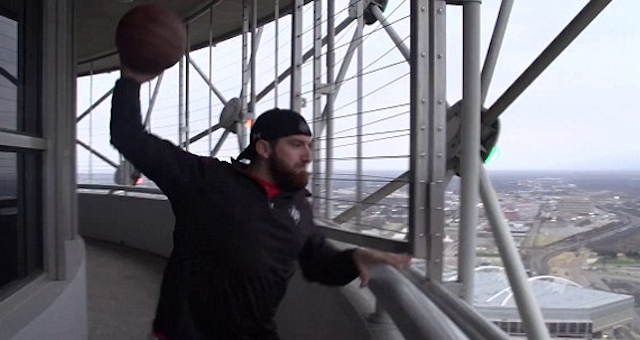 Some guy climbed up the 561 foot Reunion Tower in Dallas and threw a basketball off it into a moving net. No big deal.

The guys from some YouTube channel that I haven’t heard of but sounds kind of cool called DudePerfect thought it would be an awesome idea if they climbed up to the top of Reunion Tower in Dallas – 561 foot high – and launched a basketball off of it into a moving net.

The moving net part makes it sound harder in that the net is moving from side to side so they have to time the shot even more perfectly, but this actually made it easier because there were two people moving the net in the car park below to line up with wherever the basketball was going. Not that that was easy – and was actually pretty dangerous – but it definitely made the whole process slightly easier than it could have been. Nevertheless it’s still pretty impressive seeing such a sick shot.

The guys at DudePerfect are going to do a whole series of dumb basketball shots off famous landmarks so hopefully this isn’t the last time you’ll hear from them. One suggestion is to throw a ball off the Statue Of Liberty into a boat on the water surrounding it, which I’m sure you’ll agree would be completely ridiculous.