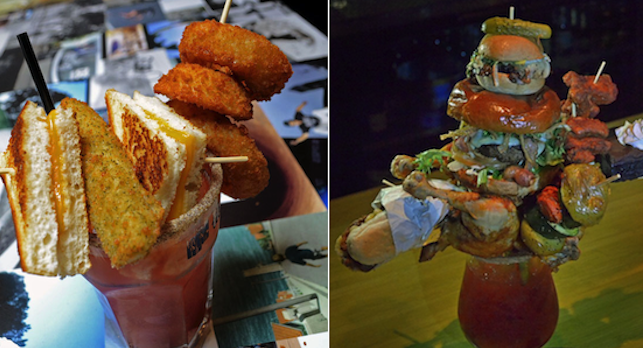 The way food is going I’m surprised nobody has thought of this before.

Wow, is this a good idea or what, even if it is a little impractical?

It’s happening up in Vancouver (no shit, those kids love their weed) at a pub called Score On Davie, which is a name that I don’t really understand and the cocktail in question is a Caesar which is the Canadian version of a Bloody Mary and I can actually say is way nicer than a Bloody Mary too.

The Caesar is actually well known over in Canada for being served with a variety of different vegetables and other cocktail accompaniments but Score On Davie had the bright idea to spice the Caesar up a little bit by adding a whole bunch of crazy ingredients including a hot dog, a whole chicken, a pulled pork-Sriracha-covered slider, fresh onion rings, tangy buffalo wings, pulled pork mac and cheese, a hot dog and a brownie, clocking in at a little over 5000 calories.

The cocktail was the idea of Score On The Green staff member Peter Verge, who saw people trying to add cheeseburgers to their Bloody Marys over in the States and decided to take things to the next level. I’m not really sure how practical it is – and at $60 a pop it ain’t cheap – but it sure looks like a beast and would definitely be something that would be worth purchasing just for the crack. Although you would probably have to get a beer or something to go with it as it would be a while before you got anywhere near the Caesar and were able to drink it.

Check out some pictures of it below. Apparently they’re all the same kind of cocktail but they all look completely different so I’m not sure how that works out, unless it’s shots of it being progressively eaten.

â˜› More Crazy Food: Messed Up Food From Around The World