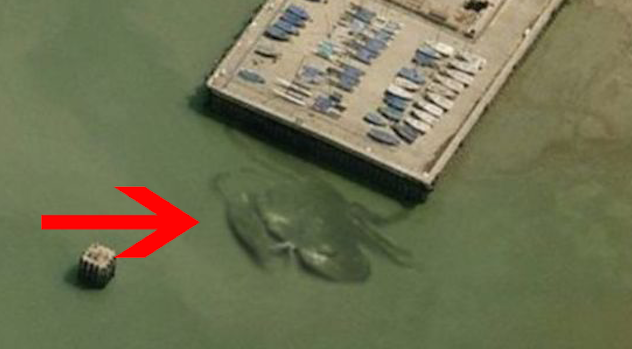 Imagine chopping that thing up for a crab linguine.

Ok so this is being reported in a wide array of different publications today and it does seem like it’s a hoax – I mean despite all the weird and wonderful creatures in the ocean, can anyone genuinely believe that a 50 foot giant crab actually exists? Perhaps not, but if it doesn’t then just what is that picture?

The photograph first emerged on the website Weird Whitstable, where the image was forwarded to its founder Quinton Winter. Quinton insists that he’s seen the creature with his own two eye though:

At first all I could see was some faint movement, then as it rose from the water I thought, ‘that’s a funny looking bit of driftwood. It had glazed blank eyes on stalks, swivelling wildly and it clearly was a massive crab with crushing claws.

Before this incident I thought the aerial photo showed an odd-shaped sand bank. Now I know better.

A graphic artist name Ashley Austin has come out though and said that the image could have been easily faked via Photoshop though:

The image of the giant crab can be quite easily recreated in Photoshop.

All the ‘artist’ had to do is find a suitable image of a crab, overlay it on to the satellite picture of the harbour and apply a few filters to it to get the realistic look.

So there you have it, it’s probably fake and until we get a better picture of it we’ll probably never know. To be honest I would probably prefer it to be fake as we can’t really have giant crabs terrorising us can we – we’ve already got this snake that looks like a giant penis causing trouble in Brazil, we don’t really want any more do we? 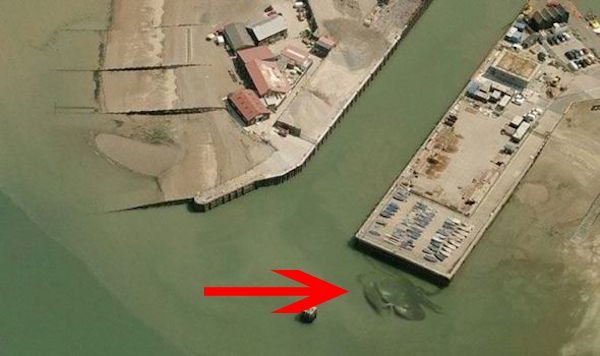 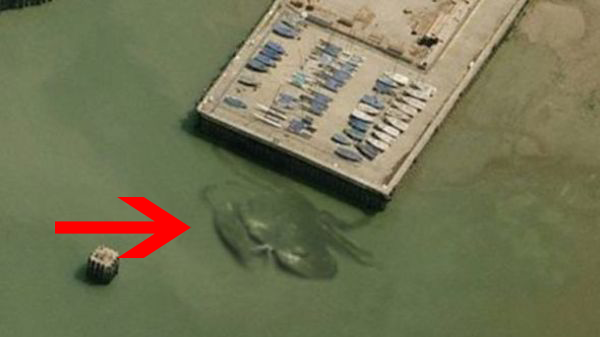