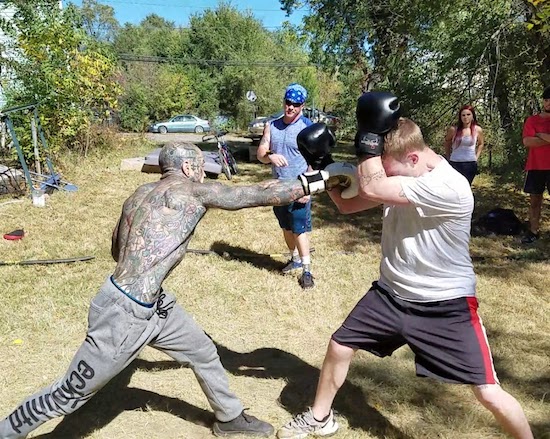 The world of backyard fighting horrifies me and fascinates me in equal measure, but one thing is definitely for sure about it and that’s that you just can’t look away from it.

The latest instalment in Street Beefs is no different as 40 year old Mighty Mouse takes on 27 year old G in a backyard boxing match where they’re both wearing 16 Oz gloves and beating the absolute crap out of each other. This is some real boxing, none of that Floyd Mayweather Conor McGregor crap:

My man G got battered there eh? Mighty Mouse looked like one hell of a seasoned competitor though and not to mention one hell of a freak with tattoos all over his body and face. Probably the kinda guy who you could imagine boxing every day for his supper. No shame in G losing to him, although he can probably take out of it that he needs to work on his footwork a bit more as he was planted solid as a rock during that fight. Easy target.

For more of the same, check out the 6 most brutal Kimbo Slice street fights. Legend.