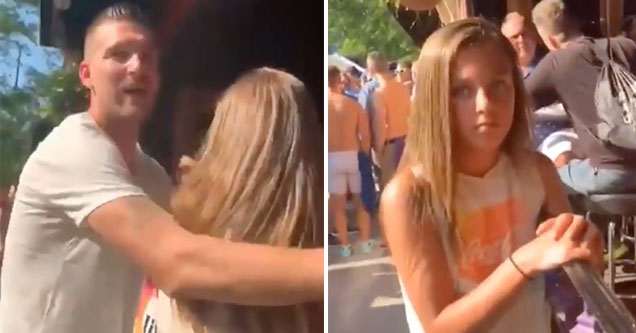 Even in the UK where the age of consent is 16, a 32-year-old going out with a person of this age is creepy, weird and not okay.

Over in America, the age of consent is 18, which is why when the guy filming this video spotted what looks like a young teen girl with a far older man all over her, he had to go and say something.

As you can see in the footage below, what emerges is that the girl is just 16 and the guy is 32. And while he tries to claim she’s his daughter, you can see from the way he’s standing over her and the way the girl looks super worried and nervous, there’s something not right about their relationship.

Plus, as is claimed by the dude filming, the creep was kissing the girl before he got caught out. Grim.

Whatever the truth of this situation is, here’s hoping the cops turned up to ensure the poor girl was safe – massive props to the man filming for stepping in to make sure she was okay.

For the man who got trapped in a tunnel he built to spy on his ex-girlfriend, click HERE.