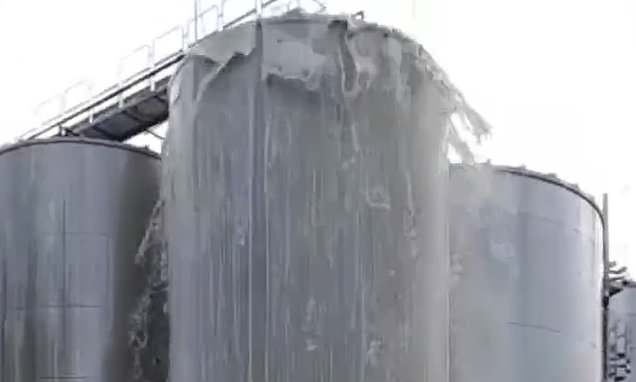 If there’s one thing that girls love then it’s Prosecco (yeah I know guys love it too but you can’t deny it’s not bigger within the female population) and so I imagine that this next article will be a dream come true for a lot of people out there.

Obviously Prosecco is fairly pricey even if you buy it from somewhere cheap like Wetherspoons, so if you stumbled upon an enormous tower just dispensing the stuff for free then I think you would be pretty ecstatic, although you would probably be pissed for the rest of your life too. This actually ended up occurring in Conegliano in the Italian province of Trevino where it looks as though the tank overflowed or the lid broke or something and Prosecco streamed down the sides of it onto everyone below.

It was literally raining Prosecco – let that sink in for a minute whilst you take a look at this glorious video:

Holy moly – I know at least a few dolled up mingers from my local Wetherspoons who would be legging it over there in their high heels the moment they saw that. They would probably end up rolling around in it like a pig in shit. Hoooooo boy.

In case you’re worried that this disaster might lead to a Prosecco shortage then don’t worry. It was a bumper harvest this year in the region thanks to the ridiculous weather so it won’t be affected at all – in fact they’re looking to produce 600 million bottles before the end of the year. Not sure how many of them are going to make it over here though thanks to Brexit, but at least we know that this didn’t screw them around too much. Nicely.

For more of the same, check out Aldi now selling a 6 litre bottle of Prosecco. Ballers.