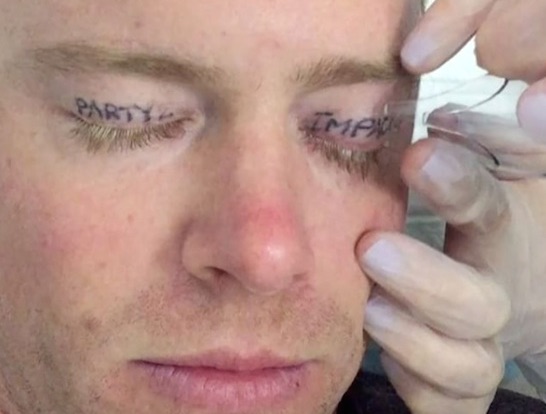 I’m sure that the majority of people reading this will have done something completely stupid when they were drunk, but I doubt anything could really compare to this story about an Australian base jumper who was visiting Mexico. I’ll let the tattoo removal company tell it:

Jay, a base jumper from Melbourne, travelled to Mexico a few months ago to climb and jump off a crane with a few of his buddies, but when the weather took a turn for the worst they ended up going on a 3 day bender. Apparently 50 cent Corona’s were too good to refuse.

Anyways, after 72 hours of partying the trio woke up and Jay, being none the wiser, started having a good laugh at his friends who had covered their legs in amateur tattoos, until they started pointing and laughing at him. Pretty quickly he realised he had ‘PARTY 2 IMPACT’ tattooed on his eye lids. Full ‘hangover’ moment.

And now he finds himself here. Bless you Mexico.

P.S. Jay has special lenses over his eyes to protect them from the laser.

Obviously he wanted to get the tattoos removed so here’s a particularly excruciating video of him going through with the process. It does NOT look like fun:

God that looks fucking painful doesn’t it? If you’re ever on a bender with me then make sure I don’t get my eyelids tattooed. Absolutely ridiculous behaviour.

Unbelievably, this isn’t even the first time this week that we’ve heard about someone getting their eyelids tattooed. For another absolute idiot, click here. Think his phrase is even dumber.