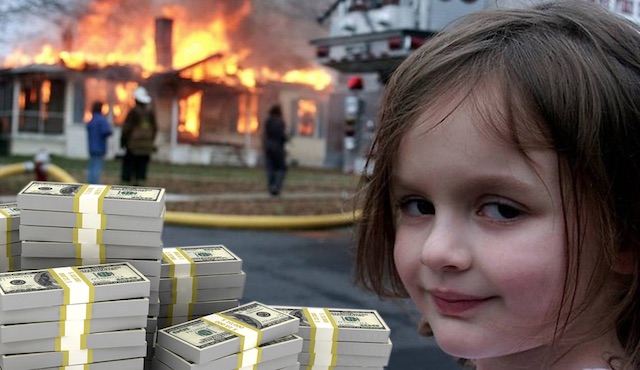 It’s been a week or so since I’ve talked about NFTs, but that doesn’t mean the dumbest craze in the world still isn’t gathering momentum and people are making a lot of money from it, after the girl in the ‘Disaster Girl’ meme revealed that she had sold it as one for $430,000.

I’m not even going to explain what an NFT is at this point but ‘Disaster Girl’ – now known as 21 year old Zoe Roth – saw how the ‘Overly Attached Girlfriend’ meme was sold for $400,000 and wanted a piece of the action, putting her own meme up for sale on Foundation. After only 24 hours of bidding, the price was agreed at $430,000 and Zoe was able to cash in on her viral fame for the first time in 16 years, with the money being split between all four members of her family, including her brother Tristan who was also taken photos of that day.

Zoe had this to say about her bumper payday:

Being able to sell it just shows us that we do have some sort of control, some sort of agency in the whole process.

It feels so good to reclaim ownership of it.

Whilst I can kinda see why it might have been annoying to have this meme of you floating around for all these years and not really receive any tangible benefit from, I also think that what she really means is that it’s pretty awesome to have a gigantic payday at the end of it as she never thought would happen. If she wants to pretend that it’s all about ownership though, then be my guest.

As part of the NFT auction, we were also treated to the story of how Zoe became a meme. Her father basically thought that it would be a good day to test out his new camera when the fire station a couple of blocks from him was practicing putting out a controlled fire and stuck the photo up on his Flickr. Three years later, the photo won JPG magazine website’s ‘Emotion Contest’ and then someone decided to use it as the basis for a Photoshop competition and now here they are, $430,000. That’s life amigo. Comes at you fast.

For more of the same, check out the story behind the Overly Attached Girlfriend meme and how much it sold for as an NFT. People really are stupid buying into this shit.