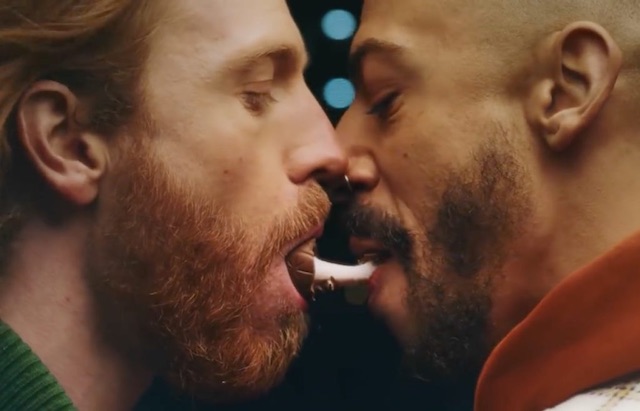 The year is 2021, so you would like to think that homosexuality in the public sphere has finally been accepted, but at least 24,000 people will tell you otherwise as they’ve all signed a petition to ban a gay kiss in a new advert for Cadbury’s Creme Eggs.

The advert was released last month to celebrate five decades of the legendary chocolate treat and features real life couple Callum Sterling and Dale Moran snogging each other with a Creme Egg in between their lips. Most people thought that this was really inclusive and dare I say it ‘woke’ , but a minority of people are seeking to ban the advert because it’s offensive to Christians and shits all over Easter apparently.

Here’s what the petition says:

By choosing to feature a same-sex couple, Cadbury’s are clearly hoping to cause controversy and escape criticism, by claiming that any objections must be rooted in ‘homophobia’, but members of the LGBT community have also expressed their dislike of this campaign.

Cadbury’s should not be seeking to hide under cover of LGBT rights to conduct a campaign which sexually objectifies individuals. If the couple in question were heterosexual, the advertisement would likely be prohibited, given the sexually explicit and graphic nature of the kiss.

Cadbury’s are well aware of the religious significance of Easter. Therefore, they are trying to cause gratuitous offence to members of the Christian community during the most important feast in their calendar.

I mean this really seems like a stretch to me. I know that advertising campaigns for huge corporate brands have to go through several levels of bureaucracy before anything is signed off, so I really don’t see anyone saying ‘yeah we’ll try and piss Christians off with this one because we know how offensive homosexuality is to them, especially around Easter’. It’s just not something that anyone would think about, is it? Unless you’re an 80 year old angry conservative man with nothing better to do I suppose.

The idea that Cadbury’s are jumping on the LGBT bandwagon because it’s the only way that they would be allowed to show a sexually explicit/graphic kiss is also complete and utter nonsense as well. There are literally so many sexy adverts over the years that nobody has ever complained or even said a word about. It’s embarrassing that something like this is even deemed controversial.

Whoever made this petition really is living in an alternate reality. Or is just desperately trying to come up with reasons to ban homosexuality from our screens. Almost certainly the latter.

For more of the same, check out when 111 homophobes complained about ‘Casualty’ airing a gay kiss. Grow up.