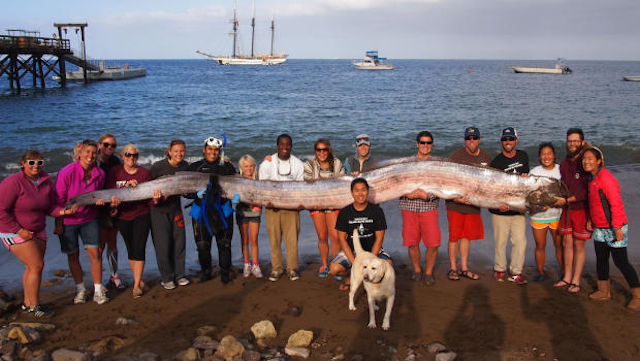 This is literally where the myth of the sea serpent comes from, and it’s pretty terrifying.

A lady from the Catalina Island Marina Institute called Jasmine Santana was snorkelling off the Southern California coast when she spotted the silvery carcass of an 18 foot long serpent like creature known as the oarfish roughly 18 feet below sea surface. She dragged it 75 feet herself – as she knew nobody would believe her unless she brought the evidence with her – until she reached the shore, at which point 14 other staffers from CIMI waded in and helped her drag it onto the beach.

That must have been a long 75 feet of dragging it, but it was worth it as researchers at the institute are calling it the discovery of a lifetime. There have been very few sightings of the oarfish recorded in history as it usually hangs out around 3000 feet underwater and little is known about them and they are largely unstudied. The last oarfish that anyone managed to capture at CIMI was only three feet long, which really puts this discovery into perspective and how groundbreaking it is.

Apparently though oarfish can grow up to 50 feet long, although none of those have been found as of yet. We can only hope that they find one of those suckers soon because I would definitely love to see that as this one that isn’t even half its size has blown my mind.

This dead oarfish has already had a bunch of tissue samples taken from it to be studied by scientists at both the CIMI and the University of California in Santa Barbara and it’s hoped that more information about the oarfish will be forthcoming following this analysis. The carcass of this oarfish will be displayed for students at CIMI for a bit, and then will be buried in the sand until it decomposes. Its skeleton will then be reconstituted and displayed at the CIMI permanently.