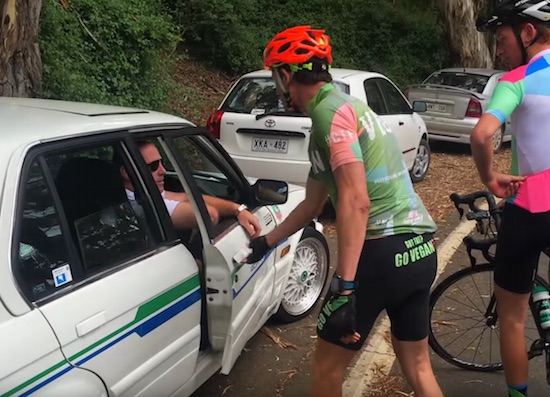 Obviously when it comes to road traffic, everyone should be conscientious of those on the road no matter what vehicle they’re in. When cars pass cyclists dangerously close, it’s not cool. Having said that, I’m not sure that controversial Australian ‘YouTube Vegan Cyclist Troll’ Durianrider deals with this situation very well.

Durianrider is so angry with a guy who closely passes him on the road that he rides after him, pulls him over and then goes absolutely mental at him on the side of the road, even though the guy seems fairly apologetic and understanding and just wants to leave. Check it out for yourself and see what you think:

Well yeah, it seems like that video is obviously edited to make the driver look like as much of a nonchalant asshole as possible. I bet he probably apologised and just wanted to be left alone but Durianrider blocked him in just so he could shout at him some more.

Whilst I agree that road users often don’t give cyclists enough room, I’m not really sure if this is the best way to raise awareness about it. Enough car owners already think cyclists are cunts and videos like this aren’t going to do anything to shatter that image. This guy seems like an idiot.

For more cyclists, check out this ostrich chasing a bunch of cyclists in South Africa. Lol.