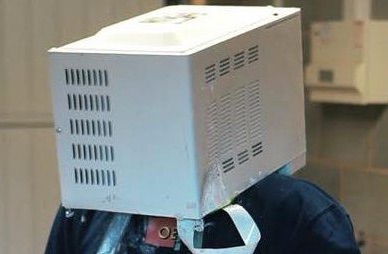 As far as stupid ideas go, I don’t think I could come up with anything much dumber than cementing a microwave to my head.

Actually, scratch that, I don’t think I would even be able to come up with that as an idea because it’s so mindnumbingly braindead. Thankfully though, some idiot from Wolverhampton decided to do it so we can all see how dumb it is in the flesh.

Apparently Jimmy Swingler is a YouTube prankster who thought that cementing a microwave to his head was his one way ticket to success. If you define success by everyone in the world thinking you’re a moron that is.

Unfortunately, once he had cemented it to his head, the microwave refused to become unstuck – not really sure what he thought the outcome was going to be other than this – and Jimmy was forced to call the emergency services to try and come and rescue him. Here’s what Watch Commander Shaun Dakin had to say about it:

As funny as this sounds, this young man could quite easily have suffocated or have been seriously injured.

Taking the microwave apart was tricky, because a lot of it was welded.

We video-called our technical rescue colleagues for advice and eventually managed to get him unstuck.

He was very relieved when we removed a large chunk of the Polyfilla with a screwdriver, allowing him to breathe more easily.

But we had to be extremely careful with the screwdriver, working so closely to his head.

It took us nearly an hour to free him.

All of the group involved were very apologetic, but this was clearly a call-out which might have prevented us from helping someone else in genuine, accidental need.

The guy’s got a point. Anyway, the video only went up yesterday and has almost a million views, so I guess he at least got what he wanted from it:

I mean I guess it’s funny, but only in a ‘this guy is a monumental bell end’ kind of way. That’s what gets the views these days though huh? 2017 baby.

For more microwaves, check out this kid using a microwave during a fight in the school canteen. Innovative.