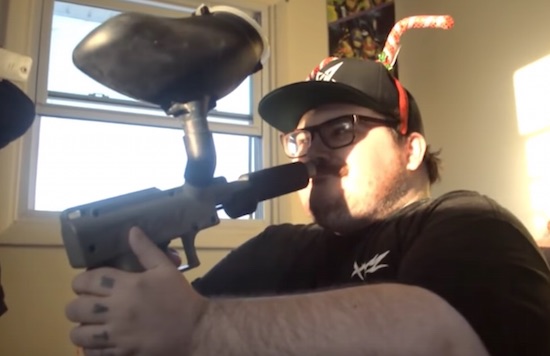 I hope he’s got dental insurance.

Some people will do absolutely anything for internet fame and virality, and vloggers seem to be getting stupider and stupider in their pursuit of this.

Case in point – the video below. It features some dude called John Bucci who seems to have literally no common sense and no regard for his well being.

In the video, he puts a paintball gun up to his face at pretty much point blank range and fires it. Needless to say the result isn’t pretty at all:

Man I couldn’t even watch that – I squealed myself when he actually fired it. What an absolute moron – what did he think was going to happen if he fired a paintball gun in his face from literally 1 centimetre away?

This guy definitely has a death wish – did you see a couple of months ago when he made a vest full of fireworks and lit it? No idea what he’s thinking really, but he’s probably going to die before he gets the YouTube hits he desires.