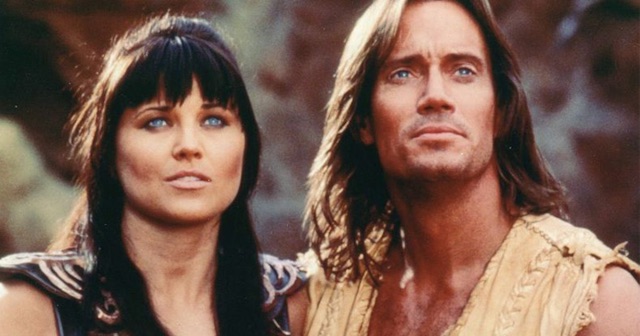 Xena was always better than Hercules.

Back when I was growing up – this is a fairly long time ago now – I remember that every Saturday night I used to sit down in my lounge to watch back to back ‘Adventures of Hercules’ and ‘Xena: Warrior Princess’ that I remember being way better than they had any right to be for that period – especially the hot lesbian action in Xena.

Anyway, it’s been kinda disappointing to have these memories tarnished recently by the revelation that ‘Hercules’ actor Kevin Sorbo is a massive Trump supporter and he reacted fairly promptly and true to form after the events on Capitol Hill on Wednesday, claiming that those involved weren’t Trump supporters but ANTIFA dressed up to try and discredit them. Thankfully though, ‘Xena: Warrior Princess’ star Lucy Lawless isn’t as big ad idiot as him and decided to call him out on social media for his ridiculous conspiracy theory views:

No, Peanut. They are not Patriots. They are your flying monkeys,homegrown terrorists, QAnon actors. They are the douchebags that go out and do the evil bidding of people like you who like to wind them up like toys and let them do their worst. #keepingYourFilthyHandsclean #enabler

Absolute burn and great to see that Lucy isn’t holding back despite her friendship/professional relationship with Sorbo. Having said that though, it sounds as if there’s no love lost between the pair after Lucy reacted to the following tweet from a follower as well:

Lol. I guess there’s no real way to confirm or deny that, but given the douchebag opinions that Sorbo seems to endorse it wouldn’t surprise me if these comments were true as well as they certainly seem to be in character for him. What an asshole.

For more of the same, check out when Kylie Jenner dressed up as Xena: Warrior Princess.  Legendary.