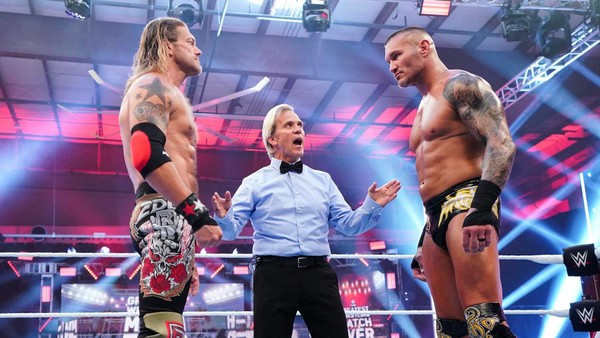 Live sport is slowly beginning again following the global pandemic and one of the biggest questions about it is how you can convey the emotion and atmosphere of a crowd when there isn’t actually one there.

Last night, the WWE tried their latest idea and it’s safe to say that it was even weirder than not having a crowd there at all. Firstly, they invited a few fans to come down and put them in sort of a plastic pig pen so they could high five wrestlers as they came out – which kinda looked like they were in jail – and then for the main event they pumped over some crowd noise to make it seem like a real wrestling event and amp it up a bit.

I didn’t actually watch it all because I’m not 15 any more, but this clip from the match between Edge and Randy Orton actually doesn’t sound that bad to me:

I mean it’s fine really isn’t it? I guess it might have been weird if they just turned it on for the main event and you hadn’t heard any of it during the whole PPV, but even so I don’t think it deserves the reaction that it received on Twitter where it was completely savaged:

That last one really is the kicker isn’t it? Now I’m down with wrestling but even I have to admit that it’s kinda funny that someone is calling out the crowd noise for being fake AF when wrestling by it’s very nature is fake AF.

I guess we’ll see if they continue with this fake crowd noise policy in the future. I’m all for it, but judging by how pissed everyone is on Twitter I’m not sure if it’s gonna be a viable continuation in the future. We’ll see.

For more of the same, check out the legendary story of Jered Threatin – the fakest of all fakers. Bizarre.