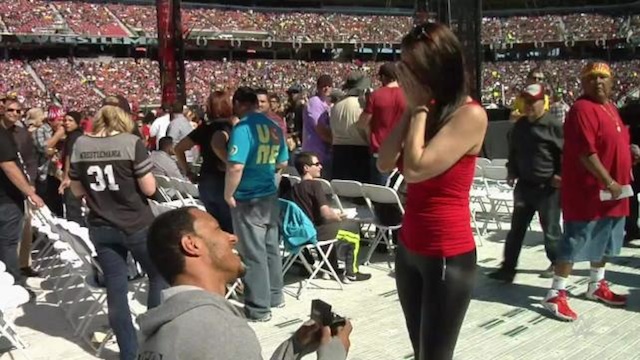 She literally couldn’t say no after that.

Wrestlemania 31 on Sunday night was actually pretty good, but it was the best night of his life for one young man.

No, not Seth Rollins – although he likely had a pretty good time – but this dude who decided to propose to his girlfriend during Wrestlemania, live on camera whislt being interviewed for WWE Network. I’m not sure if proposing at a wrestling event would be to every woman’s taste – we have to assume that because she went to Wrestlemania with the guy she must be pretty into it though – but it went down a treat with her and she almost instantly said yes and seemed super happy.

Of course, it would have been very hard for her to say no when the whole crowd came alive upon noticing the proposal, with literally everyone in the vicinity all chanting ‘Yes’ Daniely Bryan style. If ever you’re worried that your girlfriend might not accept when you propose head to a wrestling event. Definitely try this over the worst marriage proposals in history in any case.