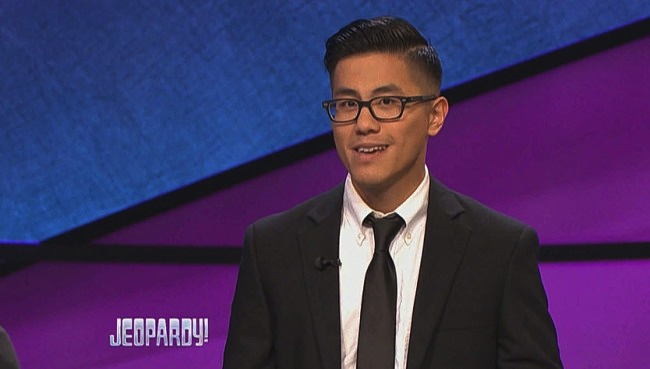 Amazingly Jeopardy is still a show and it’s taken this long for a contestant to come up with a story this bad.

I find it pretty crazy that Jeopardy and crappy game shows like that and Family Fortunes etc are still being made – especially when there are awesome new shows like this on where a woman literally destroys her life for cash – and that people actually still want to go on them and compete but then moments like this happen and it’s all worth it.

As you probably know if you’ve ever seen a game show, there’s always a little section where the host (in this case some guy called Alex Trebeck) talks to the contestants and they try and make a little joke to endear them to the audience. I say try because they’re almost always terrible and embarrassing and they just end up looking like idiots.

This one could be the worst in history though. Seriously, it’s that bad. The dude is called Dan Tran – who’s taking a break from his doctorate in physics to compete on the show – and he felt like he needed to talk about one of the most boring things to ever happen to anyone with this anecdote about jet lag.

The best part about it though is he tied for first place on the show so will be returning tonight for more stories (and possibly even more if he does well again tonight, so we could potentially have a whole load of these anecdotes. Something tells me though that even though he’s pretty bad at telling stories, Dan probably wouldn’t be the worst date ever.