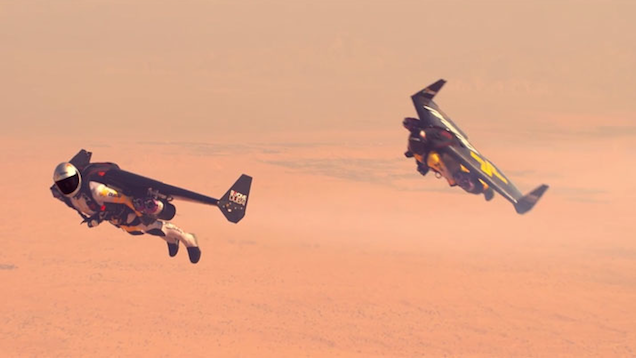 You really can become Iron Man – or at least The Rocketeer – with this bit of kit.

I’m not sure if this is actually the first jet pack in the world – we did have this water powered jetpack a few years ago – but it’s definitely the most impressive I’ve ever seen as it actually looks like a jet as opposed to those ones that the Rocketeer wears that are just pretty much an engine. As you’ll see in the video below, they also enable you to do a whole heap of awesome stunts and tricks too.

The two guys in this video have two of the most badass names ever – Yves Rossy and Veres Zoltan – and take to their jetpacks like fish to water. Rossy was actually the first man to ever fly with a jet wing on his back and it doesn’t look like he’s content to stop there as he’s still pioneering technology like this and will probably continue to do so for years to come.

The video below was made by Jetman Dubai (of course this is going to be an attraction in Dubai, of course) from a recent test flight. Jetman Dubai intends to offer ‘the culmination of decades of fulfilling a childhood dream through technological innovation, determination, teamwork and courage.’ That sounds to me like you’ll soon be able to head over there and have a go on it yourself. As great as that sounds, it also sounds equal parts terrifying and expensive so I probably won’t be doing it any time soon. Let us know if you do though.