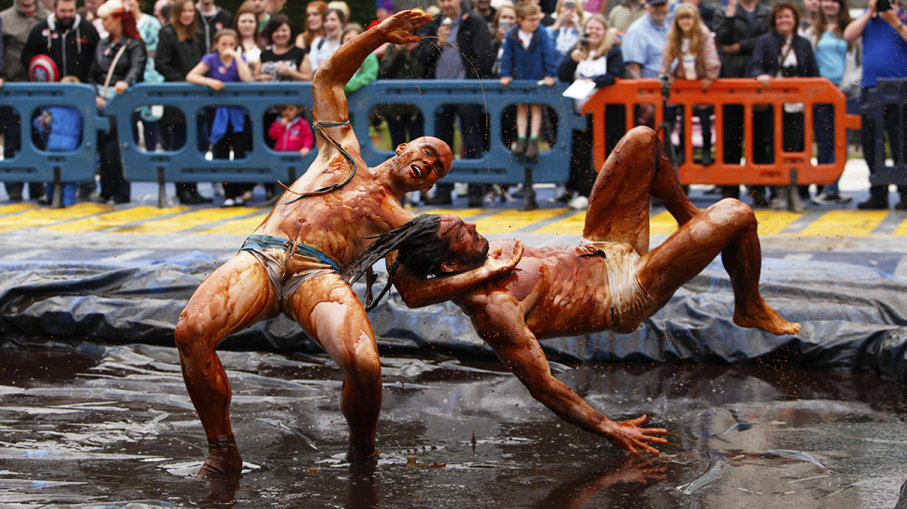 Most Northern thing ever.

I’m pretty sure that most people in this country will agree with the fact that gravy is awesome, but I’m also fairly certain that the further north you go then there are going to be more and more people buzzing off it.

If you want to disagree with me on that then you really don’t need to look any further than the World Gravy Wrestling Championship which is apparently an annual event that’s held at the Rose‘n’Bowl, Stacksteads to raise funds for the East Lancashire Hospice up in Lancashire. Competitors literally roll around in 1500 litres of gravy and wrestle each other with the one who ‘entertains’ ‘the crowd’ the most being declared the winner apparently.

It’s about as weird as it sounds:

Yeah, looks like everyone there was having a real good time in the crowd doesn’t it? I’m kidding in case you can’t tell – it looks like they were bored shitless. I guess it didn’t help that it was raining but I’m left wondering if these guys even raised any money and weren’t just doing this so they could indulge in some weird fetish where they rolled around in gravy for a couple of hours. Wouldn’t surprise me up there in the north, you know what I mean?

For more gravy, check out the gravy bar in Manchester on your way home. Possibly the most northern thing that’s ever happened.