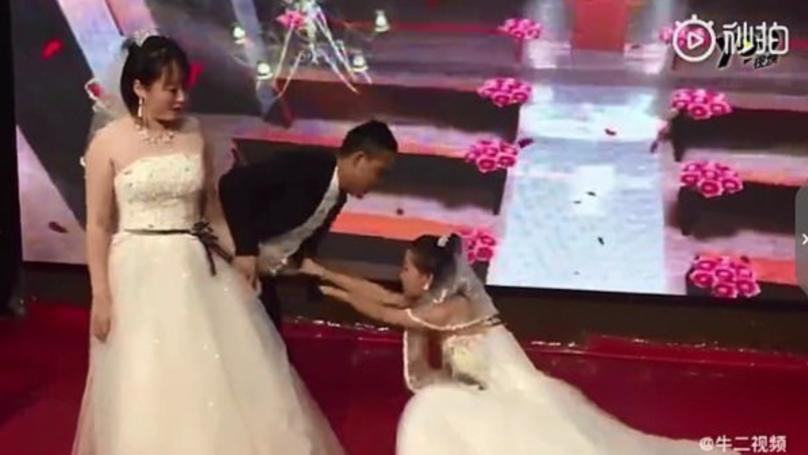 You know that part of the wedding where whoever is performing the ceremony asks those gathered if they have any reason why the two people getting married shouldn’t be married and nobody ever says anything except for in the movies?

I know all of us are waiting for someone to run in and shout something, but I don’t think anyone could have predicted what ended up happening at the wedding of some dude over in China. Apparently, the guy’s ex girlfriend turned up at his wedding IN A WEDDING DRESS and then proceeded to get up there on the stage and scream that it was all her fault that their relationship ended and that he needed to take her back.

Remember, this was at his wedding to someone else and as you might imagine, the reaction was less than stellar. Check out the footage below:

Wow, what a mess. Unfortunately because it happened over in China and I don’t speak Chinese, I don’t really know what the outcome of the situation was but given the look or horror on the dude’s face I’m willing to bet that he didn’t ditch his wife to be for his old girlfriend.

Honestly how deluded have you gotta be to try something like that though? Surely you would have thought that one of her friends might have been able to talk her out of it somehow? Or fairly easily considering it was never, ever going to work? Seriously can’t believe that someone thought that was a good idea.

For more weddings, check out this bride achieving her lifelong dream of going to McDonald’s on her wedding day. Kinda ridiculous too.