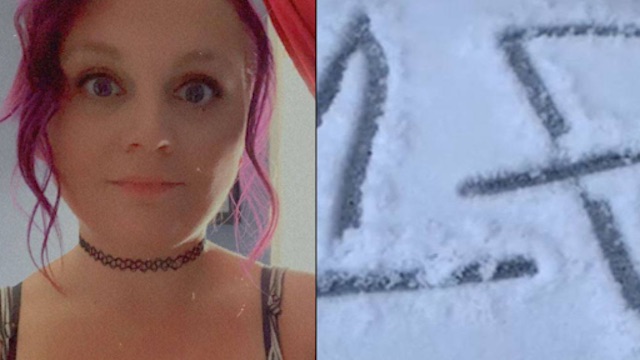 I’ve asked the question before as to what the actual purpose of TikTok is other than perpetuating more and more annoying viral trends, but here’s another time where it’s actually proved of great use – and perhaps even saved somebody’s life.

27 year old Jade Jules noticed on January 12th that someone had written 1F on her bin in the snow outside her house in St. John’s, Newfoundland, Canada. She was a bit confused about what it meant and so decided to make a video of it and upload it to TikTok, where her followers informed her that it was a gang symbol that indicated that she was a female alone on the property, making her a potential target of sex traffickers, rapist or robbers.

Jade confirmed this with the police and then moved in with her mother whilst security cameras were installed on her property. Here’s what she had to say about it all:

@bby.jade__Here’s an update yall. Cops where called. They did NOTHING!

My followers definitely saved my life. I was going out to put the trash out and that’s when I saw it. I took out my phone, recorded it and posted it on TikTok because I had zero clue on what it meant.

I thought people on TikTok would know and help me, which they did. I’m very thankful for everyone who helped me.

I was terrified – I thought someone did it as a joke or something but then all the comments and messages came in so my mom came and got me. I packed some stuff and haven’t been home since.

People in the comments of my videos are saying it means one female. Apparently it’s used for kidnapping and sex trafficking and break ins.

I’m not sure what it meant in my situation, but if all that is true, then I’m scared about what could have happened.

I’m beyond grateful for everyone that commented and messaged me telling me to stay safe and be careful and to not post my whereabouts. My followers really saved me.

That is a nice use of TikTok sure, but couldn’t Jade just have Googled what the symbol meant or something? Sure there could have been another way to figure it out, but even so you’ve gotta give props to the good men and women of TikTok for helping her out and saving her life. Scary that there are people out there doing this kind of shit though. Be careful and keep a look out for these signs, especially as it’s snowing over here right now too.

For more of the same, check out some of the most savage and brutal gang initiations in the world. Wonder if 1F has anything to do with any of them?