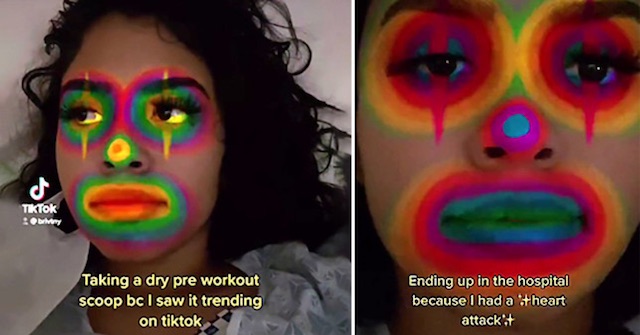 Remember when the Momo suicide game was blighting social media all over the place and causing kids to kill themselves?

Well, Momo hasn’t returned but there’s a dangerous new trend out there on TikTok that has caused one perfectly healthy 20 year old woman to have a heart attack. It’s called ‘The Dry Scoop Challenge’ and involves ingesting a pre workout protein powder without diluting it with water for an energy boost.

Briatney Portillo then proceeded to start a weightlifting session despite sweating profusely and that’s when she ended up having a heart attack:

I started weightlifting and my chest felt slightly heavy and hurting a bit.

I ignored it because I assumed it was anxiety or a panic attack and continued with my workout.

I went home and felt nauseous and had a headache.

I took a shower but still felt nauseous with a headache and couldn’t eat dinner.

I still decided to go to work, but at work the symptoms of heavy chest and chest pain came back but more intense.

In the locker room I was sweating profusely again and my head was hurting.

The pain went to my back and my left arm.

That’s when I knew it wasn’t anxiety and was maybe a heart attack.
Turns out I suffered a small heart attack and had a sensitivity to caffeine I wasn’t previously aware of.

I would advise everyone to know their caffeine tolerance, and to just mix it with water – don’t do dry scooping just because it’s trending online.

That’s pretty scary isn’t it, although I think that the chances of that happening to anyone else are pretty remote because I don’t think caffeine intolerances are that common. Pretty much just a scare story that would never really happen to anyone in real life so I wouldn’t worry too much if you’re thinking about dry scooping. Seems like a pretty dumb thing to do anyway though to be honest.

For more of the same, check out when TikTok went crazy for sea shanties. That was a weird few days.