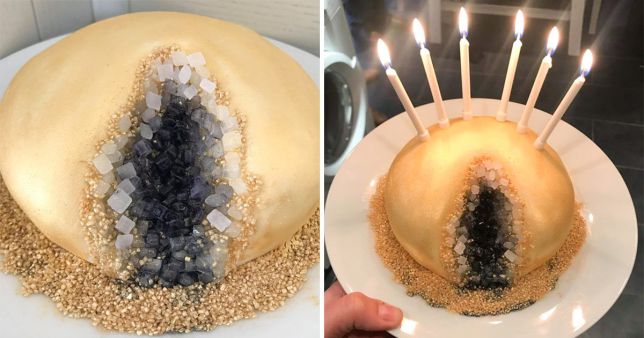 I feel like it’s always kinda hard to know what yo get a young kid for his birthday and what kind of a cake to get him as they’re constantly changing their minds and probably can’t really make their mind up on anything, but even so I doubt a 6 year old boy is really that into crystals?

However, apparently six year old Finlay Kirven really does love crystals so his mother Kate decided to make him a gold vanilla sponge cake designed to look like a geode for his 6th birthday. That’s a great sentiment but unfortunately as you can see, the cake came out looking more like a vagina than a crystal – although Finlay didn’t know that yet obviously and absolutely loved it. Phew.

Here’s what Kate had to say about the whole experience: 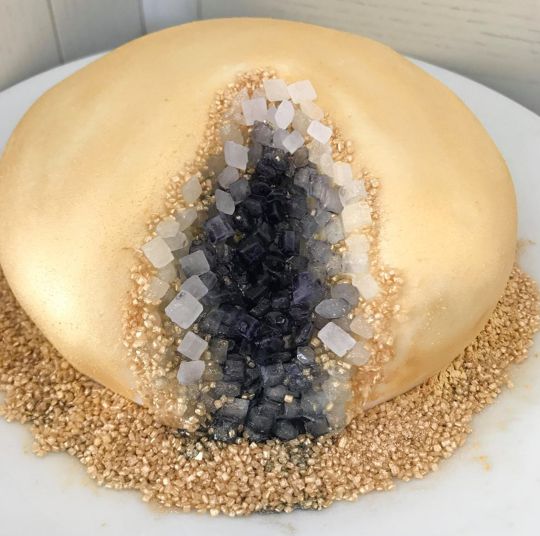 I was in the kitchen baking away and it didn’t occur to me what it looked like.

I was in the zone and so involved in what I was doing trying to get the crystals to stay put. It was quite intricate work so I didn’t take a proper look. I stepped back to take a picture to send to my husband and I suddenly realised what it looked like. I was like “oh heck”. I thought I was making Finlay a geode and then I thought “oh no I’ve made him a sparkly vagina”. My husband had a laugh and said “it will be fine, he won’t know what it is”. Finlay was delighted, he didn’t know what it was. He’s only six so he thought I’d made him a cake of his favourite rock – he thought it was brilliant. When he’s 18 he might look at it differently.

We had my dad, my husband’s mum and family members coming round to see him and the idea was to bring the cake out. I did warn my family what it looked like. My dad would have been in hysterics if I hadn’t told him. I showed it to him and he just looked at me and I said ‘don’t say anything’. They were all trying to stifle giggles while we sang ‘happy birthday’. Finlay didn’t have a clue, he thought it was brilliant. It was gold and sparkly – everything he wished for.

It’s a good job I didn’t have to go into school with it – the teachers would have been horrified. His proper birthday party is at the weekend so I’m really glad it wasn’t his cake for that party. Could you imagine bringing that thing out in a room full of school mums? There’d be uproar.

I’m planning to make another cake for his party but this one is going to be of a penguin – hopefully that will turn out okay. I keep giggling about it. I shared a picture of it on social media and I keep getting notifications about it. I thought it might give a couple of people a laugh but it’s had thousands of likes. It was my first attempt at that particular cake. I usually make one for every birthday and this is the first one that’s been an epic fail. I’m planning on showing him the picture when he’s older. It’s definitely one to bring out for his 18th birthday. 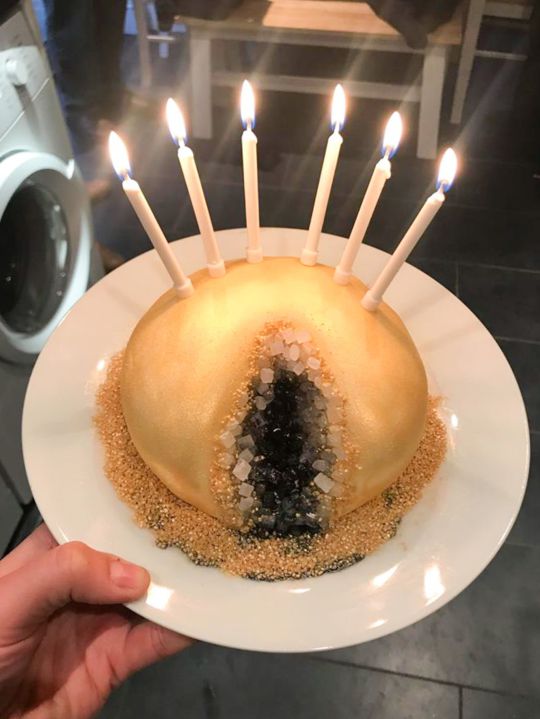 Ok Jesus woman we didn’t need to hear your whole life story, just a couple of lines about the cake probably would have been enough. I guess that’s what happens when you ask a mother about her kid or baking cakes though isn’t it – combine the two and it’s literal verbal diarrhea. Thanks for that, it kinda ruined the whole story for me to be honest.

For more vaginas, check out this woman getting her vagina smashed with a sledgehammer. Apparently it’s her party trick.