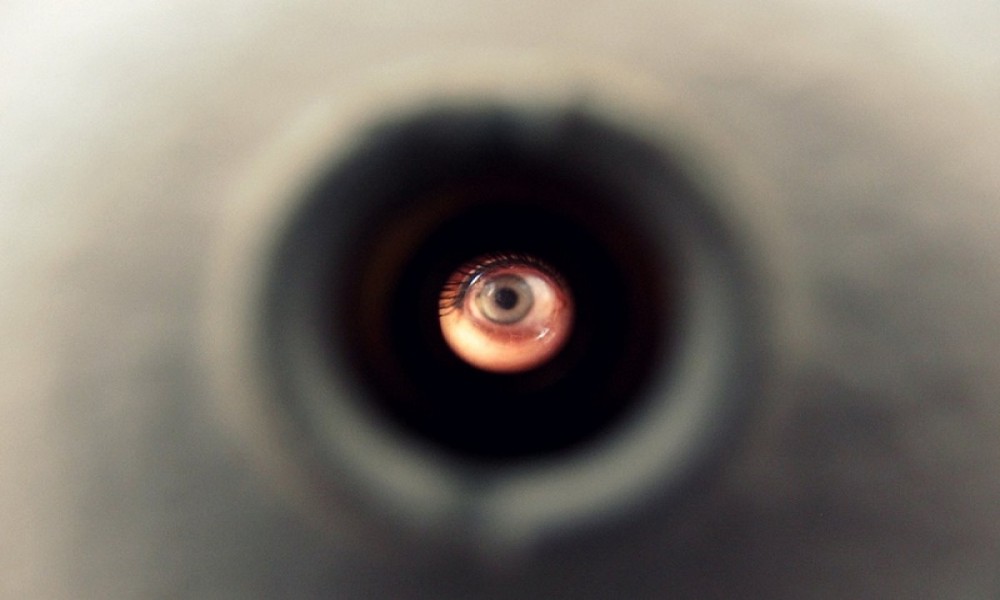 Yesterday we reported on the chilling true story called ‘The Smiling Man’. The account was shared by a Reddit user, who explained that the incident messed them up so much that they no longer walk alone a night.

Today we’ve got another treat in store from Redditor flaxenfare. This story is so fucked up that I had to constantly check over my shoulder whilst reading it. Hopefully it’ll have the same effect on you. Here goes:

Before I start here’s a bit of context to my story. My husband and I lived in a small two floor house with two main entrances, one along the front and the other on the side of the house, which opens up into the laundry room. When we’re too busy or it’s too late to walk our dog, we hook his collar onto a long line that’s attached to one of the pipes on the corner of our house, so he can use the bathroom. We used to do this from the door in our laundry room, but we’d noticed the large step from the door to the ground had been taking a toll on his hips. As a result, we started letting him out through the front door instead, since the porch is much closer to the ground.

This particular night, I was home alone with my dog and it was around midnight when I decided to let him outside one last time before going to bed. I hook him up to his line, close the door and lock it, before heading into the kitchen to put away the dishes. This was pretty routine, even if he used the bathroom quickly he liked to walk around along the front and side of the house for a few minutes before coming back inside. As I’m putting away the dishes I hear a scratch on the door (how my dog signals he wants to come inside), so I head over to let him back in.

Since I’ve watched way too many scary movies, I always look through the door’s peephole before opening the door. Out of habit I look to check that my dog is in front of the door. Instead I see a man staring very intently at the door handle.

I freeze with my hand on the door handle. I don’t know how much time went by, but then I heard another scratch, this one louder than the last. This kind of wakes me up from my initial shock and I run to grab my cellphone. I call my husband to tell him what’s happening. He was very confused, I probably wasn’t explaining the situation very well, but says that he’s heading home.

This is when I realize my dog is still outside with this person. I head back to the front door, trying to make as little noise as possible, to check whether the stranger is still there. Just like before, he’s standing there, head bowed looking at the door knob. I tiptoe over to the laundry room, and slowly open the door as quietly as possible. I can’t see my dog anywhere and the side of my house is covered in gravel, I knew I couldn’t step outside without making a lot of noise.

With my heart still pounding in my chest, I go to the front door to keep an eye on the stranger and to get a better look at him. I considered calling the police but I didn’t feel they would take me seriously, since all this man was doing was standing in front of my house. I tried taking a picture of him with my cellphone but my camera was only able to take pictures of the peephole and not the images behind the glass.

All of the sudden, the man looks up directly at me. I swear he knew I was there. He glares at me, then opens his mouth to show this taunting malicious grin. He stood there that way for a few seconds. With that, he turns around and starts to walk down the street.

I stay in the same place, almost expecting him to rush back and start pounding on the door. Luckily, my husband got back after a few minutes. Long story short, he convinced me to call the police and we went out looking for our dog. It turns out this man had cut the end of the line connected to the pipe, and our dog decided this was a good time for him to explore my neighbors backyard, which was where we found him. It’s been three years since this happened, we’ve since moved to a new house (unrelated reasons), and the police weren’t able to come up with any suspects. Ever since then, we take our dog on very long walks before the sun goes down.

Is that not just the most horrifying thought? Imagine what had happened had she not checked the peephole? As is always the case with these stories, you could speculate that it’s not true. But then why would someone even bother posting it on Reddit if it weren’t true? They’d more likely go to the nationals and make some money out of it if they were faking.

For more disturbing reading, check out this report on Unit 731 – human experimentation at its darkest moment in history.