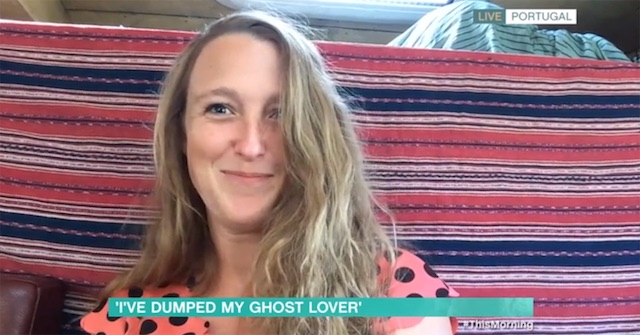 He fell in with the wrong crowd apparently.

Halloween always brings out a bunch of weirdoes from the woodwork who are convinced that they’re married to or dating ghosts, but this year we’re being presented with somewhat of a more tragic tale as this woman was forced to call off her marriage to a ghost after he fell in with the wrong crowd whilst on holiday.

Amethyst Realm appeared on This Morning today to share the story of the breakdown of her relationship with Ray, revealing that she was now using sage to keep him at bay as he sought to reconcile with her. Here’s what she had to say:

We’ve called the wedding off.

It was going really well until we went on holiday and that was about last May and then he completely changed.

I think maybe he fell in with a bad crowd when we were on holiday.

He just started becoming really inconsiderate, he’d disappear for long periods of time, when he did come back, he’d bring other spirits to the house and they’d just stay around for days.

I think he started doing drugs and partying a bit much.

He used to come back and these spirits would stay for days at a time.

There’d be crashing and banging and strange noises.

He was partying in the spirit world and this one, judging by him disappearing and then coming back to mine.

Lol. Kinda sounds like a whole bunch relationships I’ve witnessed first hand – except for the ghost part – where a guy goes off with his mates then brings a few of them back to his house to keep partying when there’s nowhere else to go and his wife/girlfriend gets really mad at him.

They normally go AWOL and don’t answer the phones/reply to messages so that’s a key characteristic too. Not really sure why Amethyst even went for ghosts int he first place when they just end up acting like regular human men too – I guess that kind of behaviour never leaves you, even when you’re dead.

In all seriousness I hope she manages to get over the breakup with Ray and move on with her life, whether that’s with another ghost or a regular disappointment of a man instead. There are enough candidates out there for her to find one I’m sure.

For more of the same, check out Amethyst talking about when she joined the mile high club with Ray. Wild.