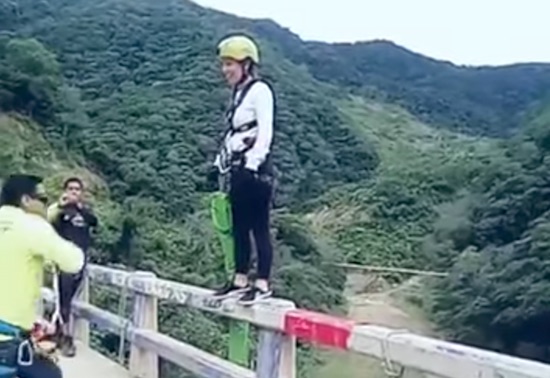 There’s always an element of danger to bungee jumping – that’s why it’s such a thrill ride – but you don’t want it to actually be dangerous because you could end up getting seriously injured or even dying.

This was the case in the clip below from Bolivia, where a woman jumps off a bridge on a bungee rope down to a shallow river. Unfortunately for her, the rope is way too long and she ends up crashing head first into the river, where apparently she was so fucked that she could only lie there moving her eyes and wait for someone to come rescue her:

What the actual fuck? How could you be so negligent about the length of the rope and how could nobody else have been injured beforehand on this absolute death trap?

If you had reservations about going bungee jumping before this video then I doubt your feelings have been changed about it following this viewing, but you’ll be pleased to hear that somehow the woman in the video ended up being OK. She was taken to hospital and discharged with only minor injuries a few days later. Kinda view that as a miracle though.

For more bungee jump incidents, check out another recent bungee jump disaster, this time a bit closer to home in Madrid. Just don’t go on them I guess.