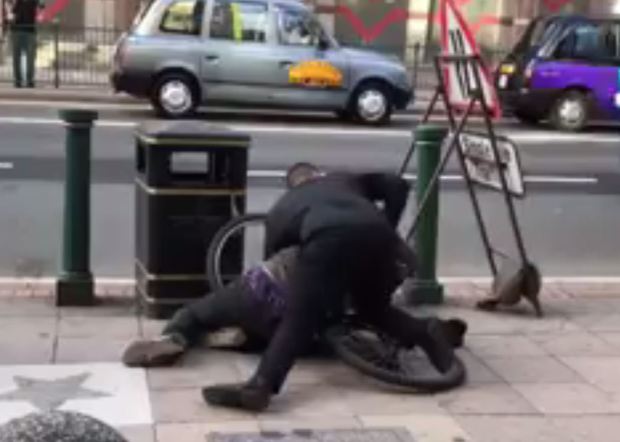 A Wetherspoons doorman has been fired after a video emerged of him online beating up a homeless man, despite passersby telling him to leave the guy alone.

The unnamed bouncer for the Soloman Cutler pub in Birmingham can be seen brutally punching the guy, who is on the floor looking pretty helpless. The incident occurred last Saturday evening.

The man who filmed the incident said:

We came out the restaurant to see a bouncer punching the homeless man until he was on the floor.

The bouncer then continued punching and kicking him until another bouncer came over and managed to get him off the man.

The bouncer then walked back to the door of the Wetherspoons pub where he was working. After this we waited with the man while he called the police. He had clear injuries.

A spokesman for Wetherspoons has said that the bouncer has since been fired:

We can confirm that the person involved was a member of the door staff at The Soloman Cutler, a Wetherspoon pub in Birmingham.

He has since been removed from his duties at the pub and other Wetherspoon outlets. It appears that he took his door badge off prior to the incident.

The behaviour of the member of door staff is completely unacceptable and we condemn it. Neither the manager or other members of staff were told of the incident by the door staff.

It is important to emphasise that the door staff do not work directly for Wetherspoons. We are arranging an urgent meeting with the company that employs the door staff team.

We trust that the homeless man has recovered from any injuries he sustained and wish him a full and speedy recovery.

We will assist the police with their investigations in any way possible.

The police are now investigating the incident, although no arrests have been made at the time of writing. So grim – I hope that they can catch that guy to give him the punishment he deserves. I obviously don’t know the full story, but the evidence is against this guy – the homeless dude looked helpless, the bouncer had removed his badge before the attack and everyone around him was telling him to stop. Not cool at all.

To read about the homeless man who was sentenced to house arrest, click HERE.