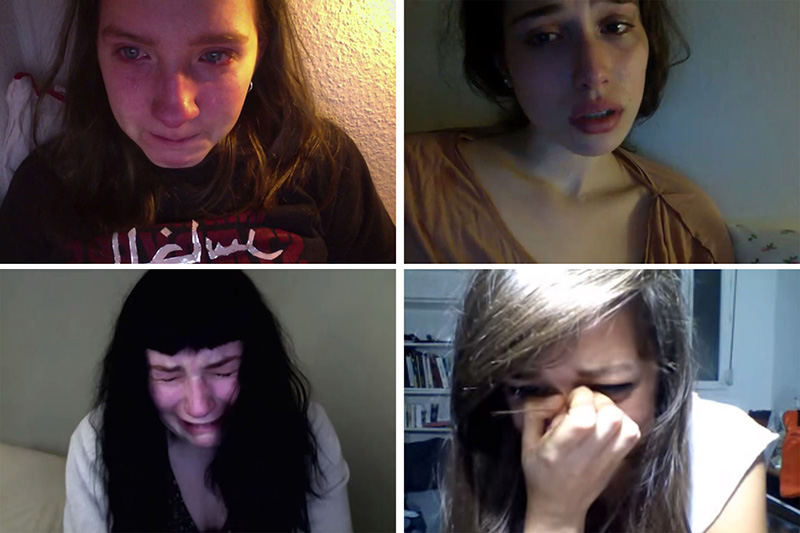 A young woman named Dora Moutot, from Paris, thinks she’s onto something after collecting a whole bunch of webcam footage of strangers crying, because she believes “tears are a new form of pornography”.

Dora says she often found herself crying in front of her laptop because she felt lonely and sad, and thought it would be grand if she could connect to others in the same way.

She encouraged other internet users to cry in front of their screens and film it, before submitting the clips to her Tumblr page ‘Webcam Tears’. She reckons there are people out there who find tears sexually arousing

Some people think it’s pathetic because they don’t understand the point and see it as pure voyeurism.

Some are sexually aroused by tears. Others feel a lot of empathy, some feel very uncomfortable in this sea of sadness, they are too embarrassed to watch while others are fascinated. But in general, people show interest and curiosity.

In a time where showing genitals on the internet is not shocking anymore, tears are a new form of pornography.

So yeah, I just had a look on Web Tears and it’s some seriously depressing shit. It’s literally just a bunch of videos of girls crying their eyes out.

The whole site is basically packed with videos like that. Depressing as fuck! I mean I get the idea about connecting people who like to cry in front of their computers but who in their right mind is “aroused” by it?

I think Dora’s wrong about that. In fact I’m pretty sure girls crying makes most men feel ridiculously uncomfortable. I have a panic attack any time a girl cries around me.

Nothing sexy about it, that’s for sure. I for one won’t be wanking off to her Tumblr page anyway. Maybe if she does something other than cry, like get naked? Just throwing ideas out there.

If you want some real tears though – check out this kid become absolutely distraught when his parents announce he’s going to Disney Land. Ungrateful little shit.