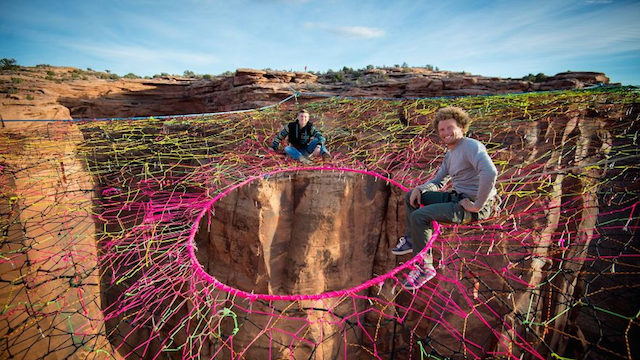 Looks like a good way to spend a Sunday.

A dude called Andy Lewis had the idea to create a massive net of webbing over a canyon in Utah and then get all his buddies there and base jump through it.

Somehow this dream managed to become a reality as Andy and about 50 other people stitched together this multi coloured webbing across a humongous canyon and called it the Mothership Space Net, and then all his buddies got up on it and did their BASE jumps off it and it looks awesome. Even more incredibly though, the webbing was suspended 200 foot from the edge of the cliff and the gang had to walk along a rope to even get there. These adrenaline junkies eh?

I probably wouldn’t have been too keen about the BASE jump (especially after watching this POV video of a BASE jump gone horrifically wrong) or walking across there on a rope, but I think hanging out on top of the webbing and looking down at the canyon would have been sweet, although probably pretty terrifying as well. No idea what they’re gonna do with the Mothership Space Net now the stunt is over, but I’d like to think they’ll keep it in place for anyone else who fancies a go at it.