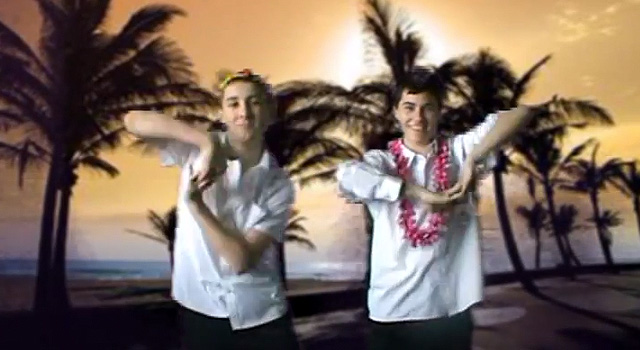 Presumably these videos only remain on the internet because the owners have long forgotten their login details.

Have you ever had one of those days where you’re super distracted and you just fall into a never-ending pointless YouTube cesspit and get nothing done? You start to watch one fairly amusing video of a cat doing something cute, click something completely irrelevant in the sidebar and somehow manage to end up binge watching something you would never usually care about – like reviews of incinerating toilets or non-subtitled clips from Korean soap operas.

The procrastination cesspit sucks me in far too often and recently I ended up in a particularly strange corner of the internet: consuming video upon video of people’s old GCSE media coursework.

The closest thing we had to media at my horrifically outdated school was art, where we mostly had to fill up a sketchbook with facts about Andy fucking Warhol, so I am forever envious of people that had the option to do media studies or even subjects such as photography and home economics. Saying that, the general consensus I get from talking to my friends who did media studies whilst they were at college is that nobody really actually did anything other than watch films and dick around with a camera a couple of times.

From an outsider’s perspective, it looks as though there were three main submission categories: mega cringeworthy lip synced music videos, short films with a “stop this anti-social behaviour” message or half-hearted horror film trailers. Presumably these videos only remain on the internet because the owners have long forgotten their login details and they have been left to gather cyber-dust, preserving the evidence of awkward teenage years.

The world should just delete the original Club Tropicana video from memory and replace it with this one because it’s actually jokes, especially if you’re stuck in the YouTube cyborg mode. The ingenious costumes are just their regular school uniforms with pound shop Hawaiian Lei’s around their necks and all of the green screen effects throughout the video are abominably perfect.

It opens with a regular school kid edited onto a VHS recorded pool scene just like in the original Wham video and our favourite actor is a particularly graceless lad who’s obviously been made to stand there and fumble about acting like a cocktail waiter. Sometimes the green screening is done so badly that they go partially invisible like little ghosts.

If there’s one thing I’ve learnt from this super-informative piece on teenage drug use, it’s that coming into contact with any alcohol or illicit substance will make you immediately drop dead in a heap on the floor. Watch out everyone because drinking from empty bottles on street corners, eating a Tic-Tac at the school disco and even talking to people in car parks will result in sudden death.

The aesthetically offensive word art transitions make you want to eat a Tic-Tac from an empty bottle in a car park  with a stranger just to speed up your demise. The two-minute video is followed up by four minutes of “bloopers” (basically just every clip they didn’t use, not funny accidents) set to Gunther’s Ding Dong Song.

If this was a trailer for a real horror film, it would definitely go straight to DVD but I’d still rather watch this than the monstrosity that is Darkness Falls. The story is set in a fictional town called Roland and opens with a bored boy in a Metallica hoodie asking his friend to turn off Hollyoaks and tell him a story. His mate tells a true tale based around the seven deadly sins which somehow relates to some bodies being found in the woods.

Highlights include fit-inducing flashing effects, bad dialogue and the constant giggling throughout the voiceover. There’s also a second-long clip of someone’s Dad having a nap on the sofa which is acted so brilliantly that I’m fairly certain he’s just been unknowingly filmed whilst actually being asleep.

All jokes aside, props to them actually doing their work and submitting something.

After Googling the GCSE Media Studies specifications and comparing the evidence, these would’ve all gotten pretty good grades and they’ve certainly demonstrated their camera wielding abilities.

Also if you’re forever finding yourself getting eternally lost on YouTube whilst trying to be vaguely productive – download the SelfControl app, it’s a life saver.