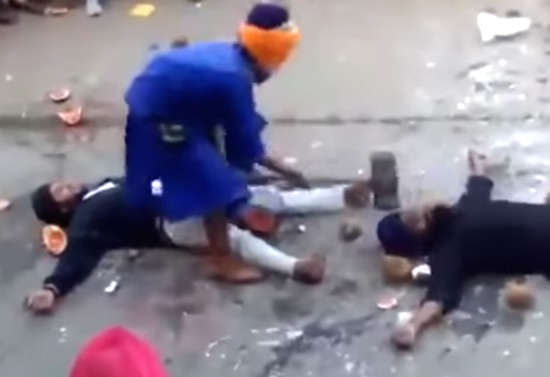 As far as so called ‘martial arts masters’ getting blindfolded and performing incredible feats of skill via their senses alone goes, you’ve got to be pretty impressed whenever you see someone pull it off.

You’re going to be equally horrified when you see someone completely screw it up though, especially if it results in someone getting really hurt, which is exactly what you’re going to see in the video below.

The video allegedly took place at a Sikh festival in India and features one of these so called ‘martial arts masters’ rocking around with a sledgehammer and a blindfold. He’s attempting to smash fruit with the sledgehammer whilst avoiding the prone bodies of some volunteers lying on the floor – it unfortunately doesn’t go according to plan at all:

Geez, that looked bad. Sure, the guy didn’t look like he was swinging his sledgehammer super hard, but it was hard enough to destroy that fruit, so that guy’s head must’ve taken a pretty brutal shot. Hope he’s OK and that the other guy doesn’t get any more credit for being a ‘martial arts master’ – he’s clearly an idiot.

If you want to see how much training it takes to actually be good at what this guy is trying to do, then check out these photographs of Shaolin Monks training. Intense.