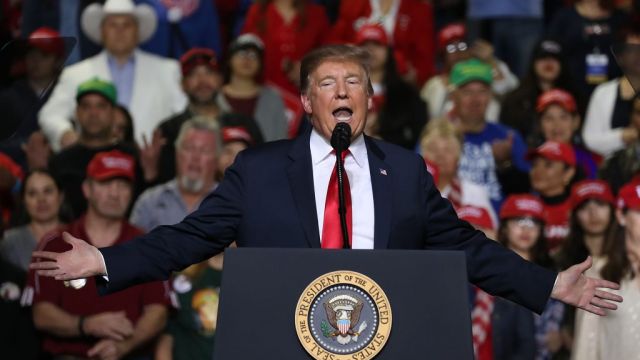 I know we haven’t really been covering it here at Sick Chirpse for the past few days, but I’ve no doubt in my mind that you’ve heard about Donald Trump’s tweets in which he said that if several lawmakers who were all women of colour didn’t like his policies, then they should go back to their own countries.

Obviously this is a highly racist remark, butTrump predictably hasn’t done anything to retract his comments and has instead embraced them and continued to further this narrative. A lot of people have found this the pinnacle of his terrible behaviour as President, but perhaps even more disturbing is that a bunch of people are actually supporting him on this point.

This was show clearer than ever last night during a rally in Greenville, North Carolina – probably the best place for it – which Trump used to attack Somalia-born, American citizen, democratic representative Ilhan Omar who had previously stated that his comments were ‘openly violating the oath he took with human rights abuses’. In retaliation, Trump stated that Omar looks down on ‘hard working Americans”, saying that ‘ignorance is pervasive in many parts of this country’, before stating that Omar has a history of launching ‘vicious, anti-Semitic screeds’.

Sadly, this was met with chants of ‘get her out’ and ‘send her back’ from the crowd. You can watch the whole video below:

Crowd at tonight’s Trump rally in North Carolina breaks out into chants of “Send her back!” as the president attacks Rep. Ilhan Omar pic.twitter.com/0q5L39W61h

Well, that was depressing wasn’t it? I would like to say that it’s surprising, but the truth really is that it isn’t at all considering the shit show that has been occuring politically in both the United States and the United Kingdom over the last couple of years. I used to say that things couldn’t get any dumber and more awful but it seems like I’m consistently surprised almost every single day by what’s going on.

Ain’t nothing much you can do but grin and bear it. So it goes.

For more of the same, check out Tommy Robinson begging Trump to grant him political asylum. At least that was a lol.