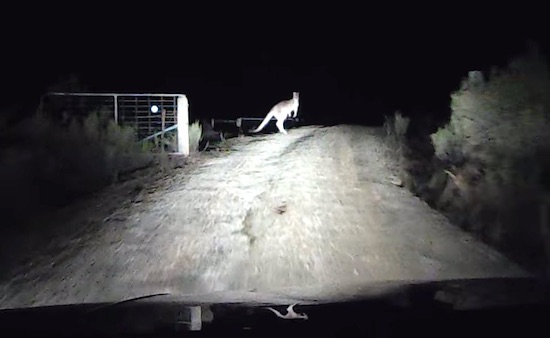 When you think of kangaroos I imagine you all generally think of some cute bouncy animals that you can have a lot of fun with. Either that or that episode of The Simpsons were Bart and Homer jump in their pouches to try and get away from the Australian government but they’re just real gooey and gross and it doesn’t really get them anywhere.

Whatever you think of them though, you probably don’t think of them as the kind of animals that would attack and totally beat the shit out of a car for no reason. Unfortunately it seems like there is at least one of them out there though that has that mentality, as you can see in the below video.

It features a guy driving down a creepy dirt road somewhere in Australia, when suddenly bam out of nowhere the kangaroo jumps his onto windscreen. Scary.

Yeah no thanks mate. I did kinda think that the kangaroo was gonna come back at the end so was kind of disappointed when he didn’t, but even so that’s a scary situation to be in. Not sure what happened afterwards but I hope that dude managed to drive out of there OK.

And what about his reaction when he got hit by the kangaroo in first place? So Bogan.

For more kangaroos, check out the henchest kangaroo in history.