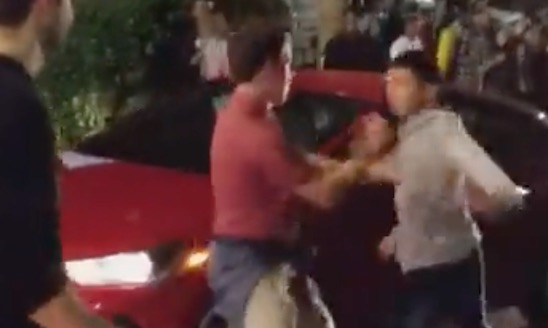 I’m not even American but I’m 100% certain that frat guys are some of the absolute worst guys out there. Of all time. No doubt.

This video even goes as far to prove why they are completely and utterly lame ass dudes. Some frat guy is picking on some scrawny looking Asian dude and being your typical frat dude and well, he gets completely and utterly sparked out without even getting a punch in. Honestly one of the sweetest connections I’ve ever seen, get this dude in the Octagon:

Wow. That’s like some Conor McGregor Jose Aldo shit except that the little Asian dude looks like Jose Aldo but punches like Conor McGregor. That punch is so sweet and then just look at the loser frat guy on his ass with his eyes wide open. Devastating. Wonder what they were fighting about?

For more of the same, check out this streetlight that ends with a double flying air kick. Wow.