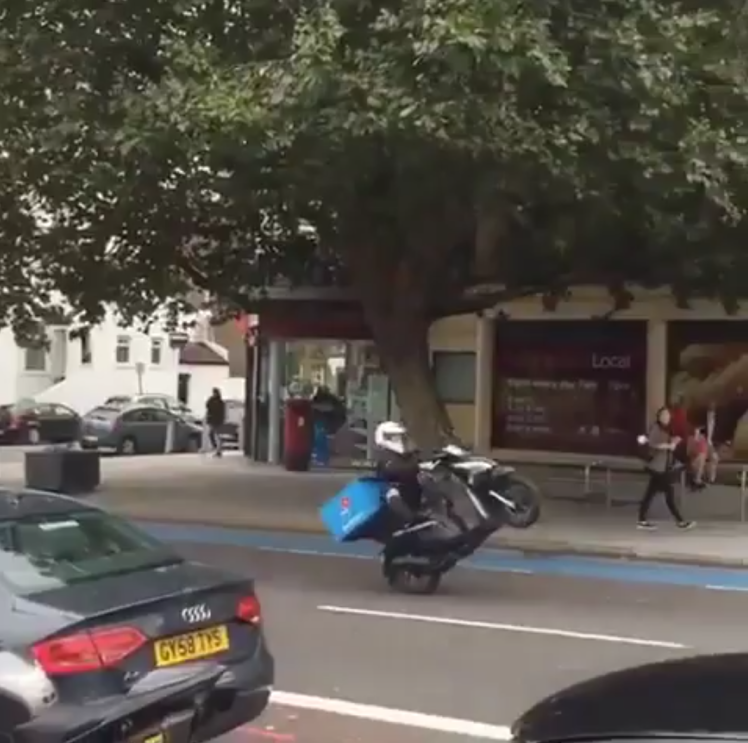 I don’t normally spend much time thinking about pizza delivery guys, but the one in this video gets an A+ for effort for attempting to make a fairly mundane job a bit more flashy and interesting – it’s just a shame about the execution.

The pizza delivery guy was driving down the road in Clapham, London when he decided to bust out a pretty awesome wheelie on the busy high street. He looked pretty dope to begin with to be fair, but it wasn’t meant to be as he completely and utterly stacked it a few seconds later. Unlucky mate:

That’s gonna leave a mark, but his pride is probably going to be wounded a lot more as not only did everyone filming it completely rinse him but it’s also going viral on the internet now. He’ll never really live that one down at all will he?

In fact, he might even end up losing his job because of it because Domino’s aren’t happy about the incident and have been typically humourless, issuing the following statement about it:

The safety of the public and of our colleagues is of paramount importance and this is clearly wholly unacceptable behaviour.

We have launched an investigation to find the driver concerned and take appropriate action.

Geez, way to be fucking asshats about it. Only person whose safety was threatened was the driver himself. Gonna get a Papa John’s next time I order a pizza.

For more wheelies, check out these guys pulling off completely insane wheelies in the face of oncoming traffic. Not advised.