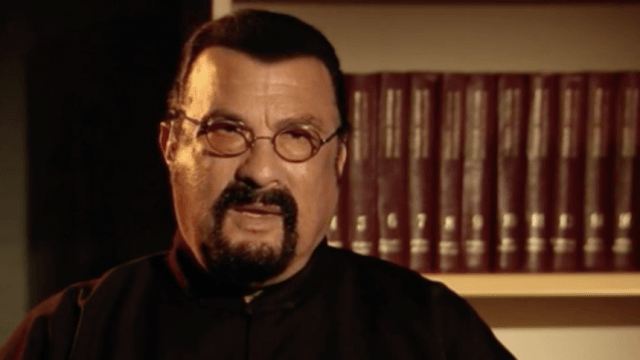 Doesn’t seem guilty at all.

It’s well known that Steven Seagal was a bit of a creep around Hollywood with several woman accusing him of sexual harassment and indecent behaviour at the height of his fame, with one woman even accusing him of full on rape.

The statute of limitations has run out on that case though and Seagal will never face a trial for it. However, it seems like he’s facing trial by the media all the time and that’s something he will never escape, no matter how hard he tries.

Seagal was appearing yesterday on BBC Newsnight to discuss his role as Russian Special Envoy to the US, but it didn’t take too long for Kirsty Work to bring up how he was dealing with the fact that so many women had accused him of sexual misconduct. His reaction is pretty telling:

This is the moment Steven Seagal walks out on a #newsnight interview over questioning about #metoo allegations, which he denies.@sseagalofficial | @KirstyWark | @BBCTwo | #newsnight pic.twitter.com/Lr6mE3th4F

Damn. I get that it’s probably pretty frustrating and annoying to be asked about things that you’ve consistently denied multiple times, but I think if it’s something like sexual misconduct then doing something like this is only going to accentuate your guilt. Probably better to stay and at least attempt some kind of an answer/explanation if you don’t want to appear like a complete and utter creep. Good work Seagal.

For more Steve Seagal, here’s a story about his new movie where he ends up fighting Mike Tyson. Must see.