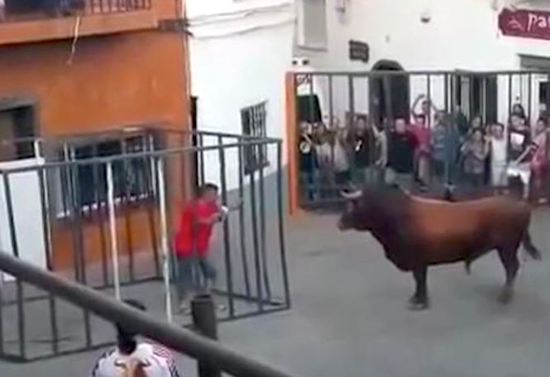 Will they ever learn?

Every year over in Spain a bunch of people get gored by bulls and every year nobody realises that it’s a really dumb and barbaric form of entertainment that could literally end in death. And yet nobody ever decides to stop it.

Here’s a video that literally illustrates just how dangerous and stupid an idea the whole thing is. It’s taken in Onteniente, a municipality in south-eastern Spain’s Valencian community and features some idiot who has locked himself in a cage to protect himself from a bull roaming the streets.

While this is a good idea in theory, what definitely isn’t is the idea to taunt the bull even further by wearing a red t-shirt and waving your hand out of the window. Because then the bull is going to smash into your cage and maul the living shit out of you, obviously:

Ouch. I guess the overall moral of this story would be to not mess with bulls full stop, but do you think this is going to stop those idiots over there doing this shit every summer? Get real.

For more bulls, check out this American getting gored in the leg during the running of the bulls. Like an American ever had a chance.