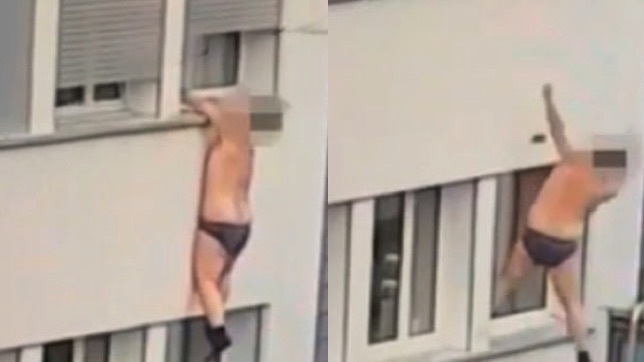 It seems like someone, somewhere is always crawling out of the balcony in their underwear to escape their lover’s husband, but the fact that it happens so often doesn’t make it any less entertaining.

This video really is up there with one of the best of them though. The footage comes from the Wallisellen region in Switzerland and it’s a bit hazy about the actual details of what’s going on – the person who originally shared it said that the guy’s lover’s husband returned home whilst he was pleasuring her, but the manager of the building said that the dude was trying to escape from the police. Not really sure why he would be naked if that was the case though?

Anyway, the funny thing is that someone filmed him hanging off the balcony naked and then falling onto a car and knocking himself out and the fall really is one of the most comedic things you’ll ever see:

Lol. I suppose we should probably be concerned about whether or not this guy is safe, but the fact of the matter is that there’s no way he was doing anything worthwhile or good if he was hanging off a balcony with no clothes on, so I think it’s probably OK to laugh at him in this scenario.

For more of the same, check out this guy getting thrown off the balcony after he passed out following a 2 day bender. Scary.