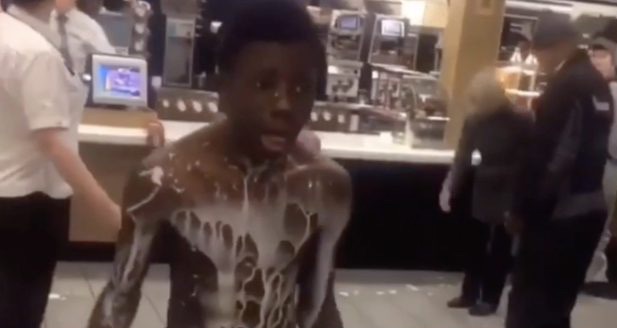 I’m gonna admit that it’s pretty annoying when you’re at the takeaway waiting for your food and it seems to be taking forever and everybody else is getting served before you, but I don’t think I would ever get as angry as the guy in the video below.

The video is believed to have been filmed in a London McDonald’s over the weekend and features a clearly irate guy stripping off his clothes and then pouring a milkshake over him, seemingly due to his frustration at how long his order is taking to arrive. It’s pretty stupid:

Yeah, kinda an overreaction, although it’s very doubtful that it’s even real in the first place as it came from the uglyfkinteen Instagram account which regularly features stupid prank videos, like a guy jumping between train platforms on the tube and narrowly avoiding getting hit by an oncoming train. Bizarrely, the backlash that he’s received for this McDonald’s video seems to have prompted him to delete his account, despite the fact that most of the stuff he’s done previously is way more ludicrous. Guess that’s just the way it goes sometimes.

For more milkshakes, check out this McDonald’s customer being served the most revolting looking milkshake of all time. Gross.