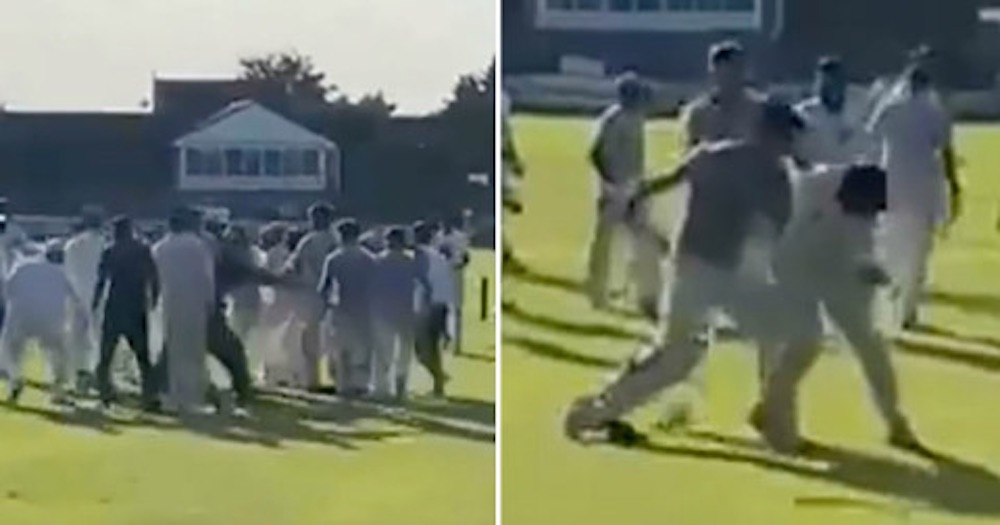 I thought this was a gentleman’s sport?

I’ve always thought that watching cricket was supremely boring – except the superover in the World Cup final, that was awesome – but this video proves that this isn’t always the case as a charity game turns ugly when the players get in a massive brawl and some of them start swinging their cricket bats at each other.

The violence erupted at the end of a recent charity game at Mote Park Cricket Club in Maidstone. It’s kind of unclear whether it was between the two teams or if it was some guys in the crowd who had cricket bats running onto the pitch and started it, but nevertheless it’s a pretty good ruck and absolutely outrageous footage.

Organiser Shehzad Akram said the following about the incident:

Disgraceful scenes during a charity match which had to be abandoned after a fight between the two teams. The violence erupted at the end of a game at Mote Park Cricket Club in Maidstone during a tournament raising money for those in need of medical treatment in Pakistan pic.twitter.com/uGOYPuc3z2

At the end of the day, we were having the final match and it was the last couple of overs when some guys came on the pitch and attacked a few of the players.

I don’t know what the main reason was behind it, but there were some troublemakers in the ground.

They started fighting with their bats and hitting people.

I was far away from it, but by the time I got near, they were still fighting and swearing at each other.

Kinda weird nobody seems to know what it was all about and everyone seems to be dodging responsibility, but it’s definitely cool that a cricket match descended into a brawl like that. I thought everyone who played that sport was supposed to be a major gentleman?

For more of the same, check out the evil eyes of this creepy cricket fan. Damn.