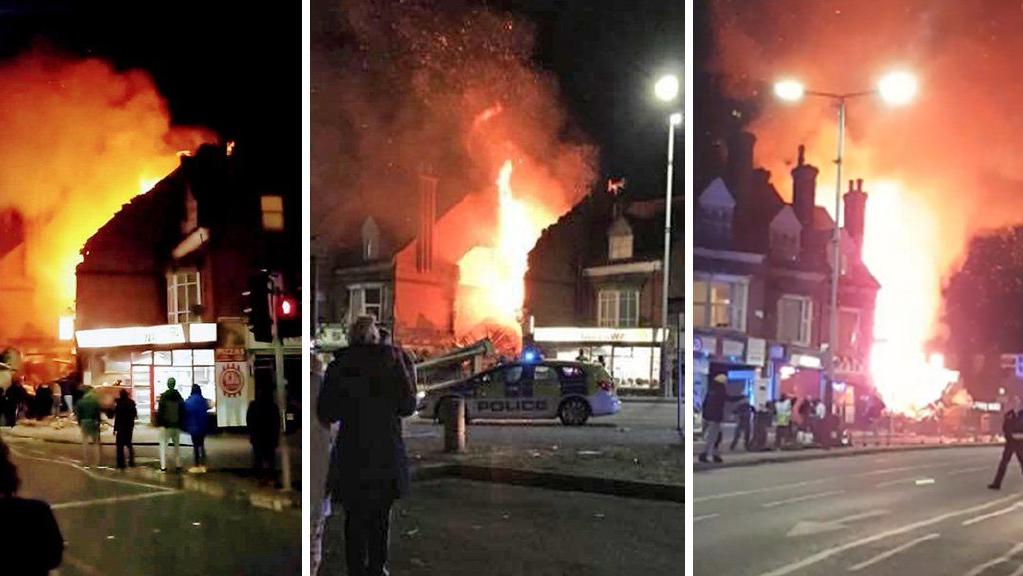 The cause is currently unknown.

A massive explosion in Leicester is all over the news this morning and rightly so as it completely decimated a shop and has left four people dead.

The explosion occurred at around 7pm last night on Hinckley Road in Leicester, which is roughly a mile west of the city centre. Around sixty houses in the area were cordoned off as firefighters dealt with the ensuing blaze and dug through the rubble trying to find survivors. Several people have been admitted to hospital, with Supt Shane O’Neil saying the following (you can also see footage of the explosion and the aftermath):

There are four confirmed fatalities at this stage and a number of people still undergoing treatment in hospital.

The building consisted of a shop premises on the ground level and a two-storey flat above it. We believe there may be people who have not yet been accounted for and rescue efforts continue in order to locate any further casualties.

Once the site is deemed to be safe a joint investigation with Leicestershire Fire and Rescue Service will begin looking into the circumstances surrounding the incident, which at this stage is not being linked to terrorism.

Sounds like an absolute disaster. Not really sure what could have caused an explosion like that but let’s hope that they get to the bottom of it in the coming days and prevent anything like that from ever happening again. Let’s also hope that any survivors are found and treated so that there are no more deaths involved. RIP to all the victims.

For more explosions, check out this ‘mother of all bombs’ explosion that killed 36 ISIS fighters. Yeowch.