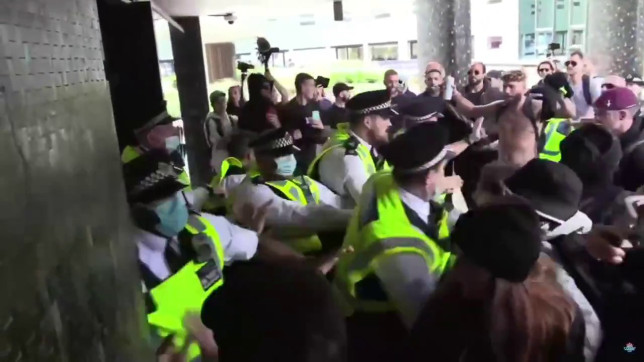 One of the stranger aspects of the discourse between anti vaxxers and the rest of the population is how they still seem to be protesting against lockdowns even though they’re officially over – at least for the moment – and this was demonstrated again yesterday in a new protest where anti vaxxers decided to target the former HQ of the BBC.

This is funny for the reason that they clearly thought that the BBC was still operating out of this complex as their rhetoric is very anti BBC regarding their ‘propaganda’ coverage of the coronavirus situation, whereas in actual fact it’s mainly ITV that film at Television Centre in West London these days and the crowd only succeeded in delaying the cast of ‘Loose Women’ for a few extra hours. However, it’s also kind of scary when you see the footage and realise how desperate and ravenous these people are in their clashes with the police in an attempt to get into the building for some reason, as they complain about their freedoms being taken away, vaccination passports and the effect on our children.

Here are the videos:

Official Voice protesters try storming the BBC studios at white city but them come up against a heavy police presence- they are protesting against vaccine passports and vaccine for kids pic.twitter.com/FGTSJ6WLmu

Geez that is sorta terrifying isn’t it? Although kinda strange that they couldn’t just bust past the cops at the beginning if they had really wanted to because there’s so many more of them than there are police trying to keep them out. That one guy is trying to tell people to stay calm so maybe this was supposed to be a peaceful protest, but even though they don’t break in it definitely gives me the creeps. Seems like this kind of stuff is probably here to stay though for now.

For more of the same, check out this anti vaxxer who ended up dying from COVID making a video saying how he was happy he was happy he caught COVID because he didn’t trust vaccines. Tragic.