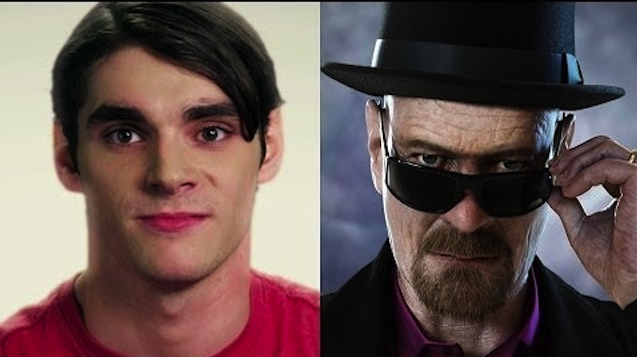 If you still haven’t finished Breaking Bad, then avoid this for spoilers.

Breaking Bad might have finished last summer, but it’s still very much entrenched in popular culture as can be seen by the existence of this video in which RJ Mitte (who played Walt Jr in the show if you didn’t know) wishes his father a happy father’s day.

And why shouldn’t he? Walter White was arguably one of the best fathers in history – going above and beyond the call of duty to provide for his son and ultimately leaving him with millions. It’s just a shame that in order to do this he had to become a crystal meth kingpin and kill a fuckload of people, including Walt Jr’s beloved uncle Hank.

Still, for the majority of five series Walt Jr. had a pretty awesome dad, and at the end of the series he’s gonna get a massive windfall – although he’ll never know where it actually came from. It’s a shame that the series ended with Walt Jr hating his dad, but it seems like he’s got past this with this video, just like anyone who watched the show would know that, given time and access to all the facts, he probably would.

RIP Walter White – one of the greatest fathers ever.