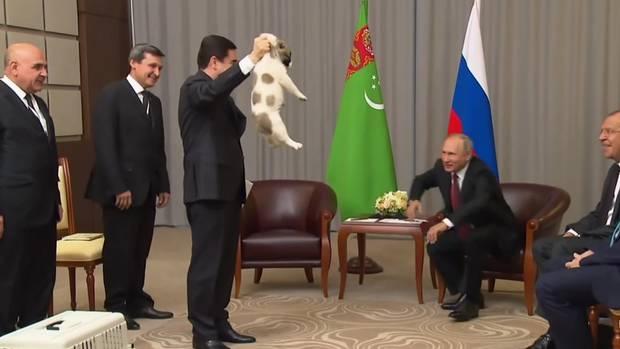 It’s not easy to make Putin look like the good guy, but the President of Turkmenistan managed it.

This clip is going viral at the moment and I think it may just lead to some countries rethinking their foreign policy after Vladimir Putin steps in to save a puppy from the monster that is the President of Turkmenistan.

Funnily enough, Gurbanguly Berdymukhamedov had just gifted this puppy to Putin, but for some reason he then gets this weird urge… to pick it up by the scruff of the neck:

I know people say that that’s the way mothers carry their puppies and so it’s completely normal, but I’m sure if dogs could stand up and had arms and legs and opposable thumbs there’s no way they would be lifting their pups by the scruff of the neck.

Even Putin is like ‘WTF?’ Just look at his face: 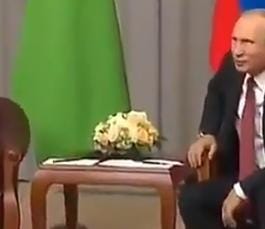 Putin lets this go on for only a few seconds before intervening and giving the pup a comforting boop kiss on the head: 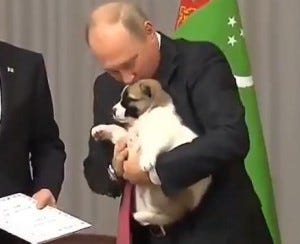 I mean you would think it’s nearly impossible to make Vladimir Putin look like a normal, compassionate human being who cares about the mistreatment and suffering of animals and yet the President of Turkmenistan achieved that without even realising it.

In fact I just looked it up and it turns out Putin is the one who introduced laws in Russia banning the harming of strays and ruling they must be captured and treated well.

It looks as though animals in general love him – look at this pigeon giving him a salute:

Then again Hitler also loved dogs – so maybe not the most reliable test of a good person. But on this evidence heaps better than the President of Turkmenistan at least.

For the man who found an Aldi steak that’s the spitting image of Vladimir Putin, click HERE. Uncanny!