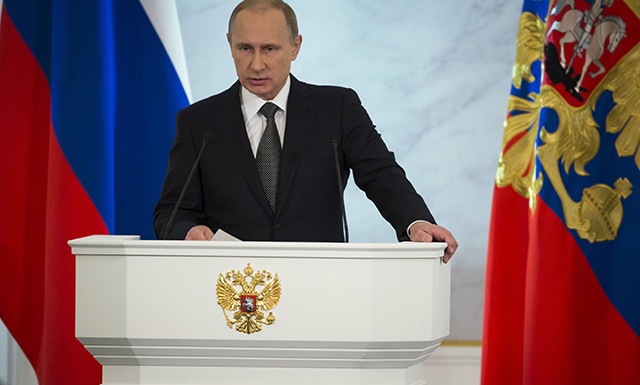 If he’s advertising a press conference like this, then just what the hell is he going to say in it?

Russia’s economy has crashed massively in the last few days. The ruble dropped 19% of its worth from Monday to Wednesday – which is the single biggest drop in its 16 year history – and this has reportedly led to Russians mass rushing to malls to swap their TVs, washing machines and other luxury items for cash before it drops even further.

Although the economy over there has been a mess for some time, there are two reasons fro this sudden crash: plummeting worldwide oil prices (Russia makes most of its money exporting oil) and recently imposed western sanctions over the whole Ukraine affair. Although there’s no real reason for the sudden drop – it just seems to be fuelled by months of fear coming to a head as investors struggle to get their assets out of Russia – it’s clearly affecting the country massively and shows no sign of subsiding.

Of course, Vladimir Putin needs to do something about this and do something fast. His solution: hold a press conference and create an absolutely terrifying/insane trailer to promote it. The trailer can be seen below and features loads of important world events form the last few months – the ISIS beheadings, Ukrainian rioting, flooding, some stuff going on in space? – and kind of looks like it’s advertising the next big apocalypse movie or something, so God only knows what Putin is going to announce during his press conference tomorrow. With hype like this though and the economy the way it is, it probably needs to be something drastic to try and get Russia back on track. To say we’re scared would be an understatement.

In case you’re wondering, the text at the end of the video reads something along the lines of ‘Vladimir Putin press conference, 18/12/2014, 12:00.’ I get that he wants people to tune in, but does it really need to be as dramatic and terrifying as this? We’re bricking it over here.