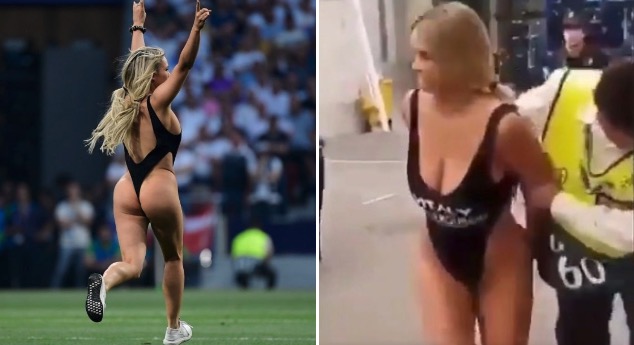 Here’s how Kinsey Sue and her boyfriend prepared for the big stunt.

In case you missed it last weekend, this absolute legend named Kinsey Sue went streaking on the pitch at the Champions League Final between Liverpool and Tottenham.

Her stunt afforded boyfriend Vitaly Zdorovetskiy (himself a notorious streaker who is banned from stadiums around the world) £3 million worth of free advertising for his website ‘Vitaly Uncensored’.

Kinsey Sue’s Instagram also shot up from a few hundred thousand followers to over 2 million in the space of a day, which is incredible. For some reason her Instagram has now been suspended, but I imagine it will be back up soon considering she’s a worldwide mega star right now.

Anyway, Vitaly and Kinsey Sue uploaded this video earlier capturing their thoughts and fears as they prepared for the big stunt, including Vitaly donning a disguise to enter the stadium and collecting Kinsey from the police station afterwards:

Have to admit- these two are a pair of fucking geniuses. Pay £3 million+ for a few seconds of advertising at the Champions League final? Nope, how about we just run out on the pitch and get half a billion eye balls on us for free. It was so worth it considering how much they’ve blown up since.

The best bit is that usually these streakers are some activist types promoting or protesting some kind of political movement. Kinsey Sue however is just a babe going out there winning over the people and advertise her brand.

To watch Vitaly’s famous ‘How To Catch A Predator’ prank, click HERE.