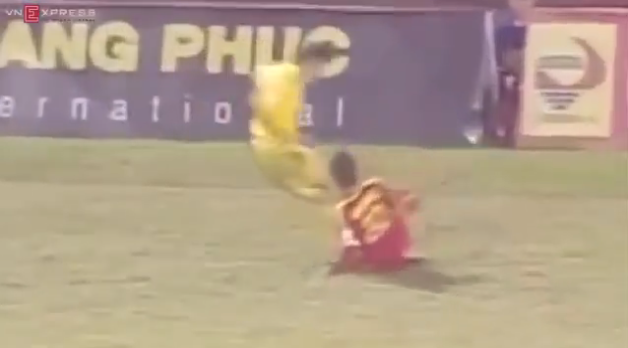 Was this tackle really worth a 28 game ban?

It was announced recently that the Vietnam Football Federation were handing a 28 match ban to Tran Dinh Dong, a 26-year-old player with Song Lam Nghe An for a particularly nasty tackle on a player named Nguyen Anh Hung, who is expected to be out of football for a year due to the broken leg he suffered at the hands of Dong.

I thought when I heard about the length of the ban that this would be one of the most truly horrendous tackles I’ve ever seen, but it doesn’t really seem that different to a number of two footed tackles I’ve seen in the Premiership over the years (Steven Gerrard on Gary Naysmith springs to mind), only that this one actually connected and probably had the worst possible outcome.

Still, perhaps the Premier League and other footballing bodies should follow the VFF’s lead and start banning players for a really long time if they commit reckless tackles like this, because the sooner they stop existing then the sooner people will stop having their lives and careers ruined. Dong was also forced to pay Hung’s medical bill, which probably cost him a pretty penny too.