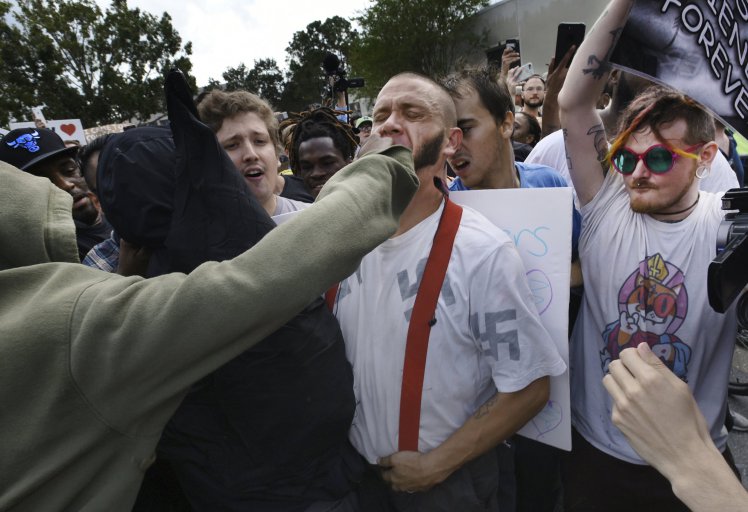 Right in the kisser.

A Nazi named Randy Furniss received a mixed reception at a white supremacist event this week when he was hugged by a man, only to then be punched by another one just seconds after.

Furniss was on his way to the University of Florida to hear white supremacist Richard Spencer speak – by the way, in case you hadn’t clocked Richard Spencer was the Nazi who was famously punched in the face at Donald Trump’s inauguration earlier this year. Lol.

Anyway, despite being surrounded by a strong crowd of anti-fascists protesting the event, Furniss was actually given a hug from a protester, who then asked, “Why don’t you like me dog?”. However, the love for Furniss swiftly changed to hate, as an unidentified man lunged out of the crowd to punch him in the face. And of course people were on standby to film the whole thing:

Protesters are punching, spitting at this man who has swastikas on his shirt. #spenceratUF pic.twitter.com/SuK0xFfixY

Apparently the protestors at the event far outnumbered those who attended to hear Spencer speak after local bars offered free drinks in exchange for tickets to his talk. This resulted in bars being rammed full of anti-fascist protestors. Aside from the punch, there were no other reports of violence at the event. I guess it was a one-punch wonder.

For more of the same, here’s the time Twitter users joined forces to track down and punch a Nazi in the face.