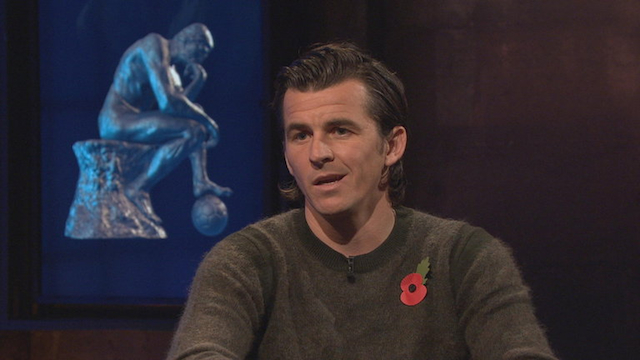 Joey Barton has said a lot of crap during his time as a player but this is probably his most outlandish statement yet.

You have just got to love Joey Barton, mainly for all the crap that comes out of his mouth considering he’s such a painfully average footballer which is given even more weight these days considering he’s playing his trade in the Championship. Again.

Last night he was a guest on Sky Sports’ new show  ‘The Footballer’s Football Show’ where a bunch of pundits/celebrity guests talk about issues surrounding the game that aren’t normally brought up on TV shows, like the life of a football scout for instance or what happens to players when they retire, all whilst sitting in some kind of late night poker den/secret room in a big house with a fire.

During this episode, presenter David Jones was asking Barton if he’d fallen out of love with the game given the way his career had gone recently and the constant criticism he receives from the terraces. In response, he came out with the line that following his retirement he would stay in the game and become a ‘top, top coach or a top, top manager – without a shadow of a doubt’ which was said without the merest hint of irony.

Now, I don’t deny Joey Barton could probably become a manager or a coach, but to suggest that he could be a ‘top, top manager’ is a bit crazy from him considering most players would probably feel that they needed to respect their manager. This is something that Joey Barton has failed to achieve over and over again during his million attempts to reinvent himself in his chequered career, with the most famous recent incident probably being when he kneed Sergio Aguero in the back at the end of the 2011/12 season.

Does anyone really think that this clown can make it as a ‘top, top manager’ when so many others have failed? It’s great that he thinks he does because it’s going to be hilarious watching him try – that is if anyone will even give him a job.