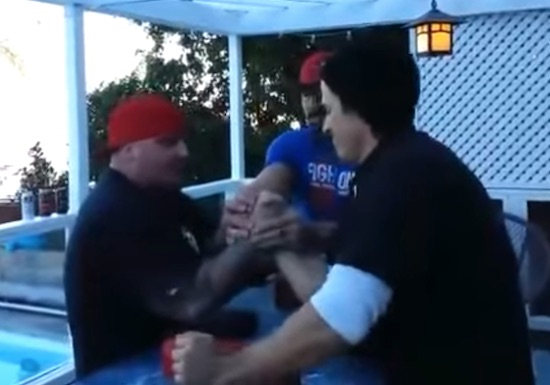 It’s like an entire series of Jersey Shore in one minute.

I don’t know much about the world of arm wrestling. However, I would imagine that it’s populated with the kind of meatheads that appear in the video below, which seriously has to be one of the most ridiculous things I’ve ever seen.

It’s probably best to watch it without any preconceptions, so I’m not gonna say anything and just let you dive right in:

Wow. I can’t believe how much drama and stupidity they managed to fit into just under 90 seconds.

The guy in the red hat really has to be contender for the worst person on the planet. Some of his insults were absolute gold – ‘I’ll wear the condom in my mouth’? What the hell is he even trying to say with that one? Completely lost on me. Really great when he falls on the floor at the end, but I suppose there was only one way that this video was going, wasn’t there? That’s just the icing on the cake.

For more arm wrestling, check out this video of a woman with a broken arm competing in an arm wrestling contest and breaking the other arm. Ridiculous.